McCarthy calls on Pelosi to suspend Trump impeachment inquiry, accuses her of ‘recklessness’

“Unfortunately, you have given no clear indication as to how your impeachment inquiry will proceed – including whether key historical precedents or basic standards of due process will be observed,” McCarthy said in his letter. “In addition, the swiftness and recklessness with which you have proceeded has already resulted in committee chairs attempting to limit minority participation in scheduled interviews, calling into question the integrity of such an inquiry.”

I’ve written to Speaker Pelosi to halt the impeachment inquiry until we can receive public answers to the following questions. Given the enormity of the question at hand—impeaching a duly elected president—the American public deserves fairness and transparency. 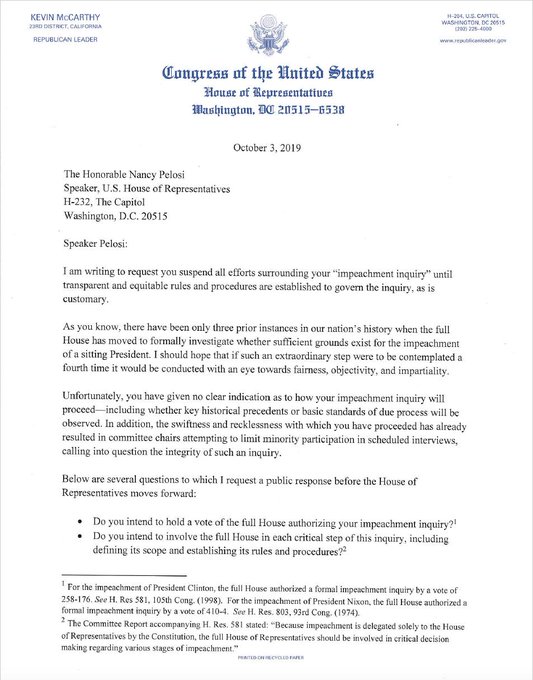 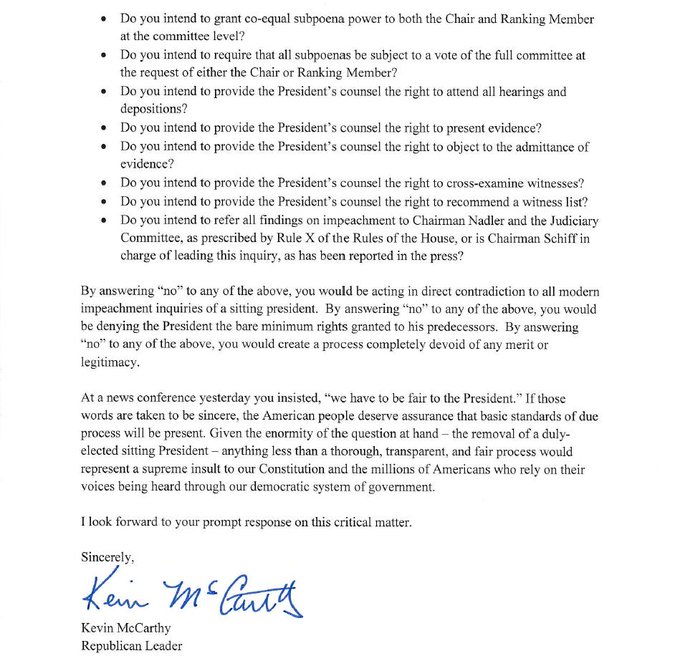 18K people are talking about this

Hours after McCarthy’s letter was posted, Pelosi responded with her own note suggesting Democrats would not be hitting pause anytime soon. She wrote that “existing rules of the House provide House Committees with full authority to conduct investigations for all matters under their jurisdiction.”

Pelosi added: “We hope you and other Republicans share our commitment to following the facts, upholding the Constitution, protecting our national security, and defending the integrity of our elections at such a serious moment in our nation’s history.”

On Thursday night, McCarthy fired back. “Your proclamations of fairness fall flat when you deny a process that provides it. Simply put, you are failing to meet the basic standards of due process observed by past speakers of the House,” he wrote in a letter. “Without transparent and equitable rules and procedures, the American people will forever understand this sham process for what it is—the fulfillment of a partisan goal to reverse the 2016 election.”

In his initial letter to Pelosi, McCarthy asked a number of questions, including whether Pelosi plans to hold a full House vote on authorizing the impeachment inquiry, whether she plans to grant subpoena powers to both the committee chairs and the ranking members, and whether she’ll allow Trump’s lawyers to attend the hearings.

After concerns were first raised about an “equal playing field” during the Volker session, Fox News is told Democrats made concessions and agreed to equal representation from Democratic and Republican counsels in the room. However, even though there are representatives from the Intelligence, Oversight and Foreign Affairs Committees, only the Intelligence Committee can ask questions.

Volker – who resigned from his post last week — testified Thursday in a closed-door interview about an anonymous whistleblower’s complaint about a July 25 phone call in which Trump asked Ukrainian president Volodymyr Zelensky to investigate Democratic presidential candidate Joe Biden’s family’s dealings in the country.

Volker was expected to voluntarily give a transcribed interview before the Schiff-led Intelligence Committee as part of its impeachment inquiry into whether Trump abused his authority by asking Ukraine’s president to investigate Biden, a leading candidate for the Democratic Party’s 2020 presidential nomination. Trump is being investigated amid claims that he threatened to withhold $400 million in military aid unless Ukraine investigated Biden, his son Hunter, and their business dealings in the country.

The House minority leader’s letter earned him the praise of President Trump, who also took the opportunity to slam the Democrats who opened the impeachment inquiry into him.

I’ve written to Speaker Pelosi to halt the impeachment inquiry until we can receive public answers to the following questions. Given the enormity of the question at hand—impeaching a duly elected president—the American public deserves fairness and transparency. pic.twitter.com/EFKOghyf9w

25.4K people are talking about this

McCarthy’s questions come a day after the leading Republican on the House Foreign Affairs Committee, Michael McCaul, said in a letter to Chairman Eliot L. Engel, D-N.Y., that despite statements made by Pelosi and other Democrats, “there is not a ‘House of Representatives’ impeachment inquiry” because the entire House has not voted on the matter.

Citing House Rules X and XI, McCaul said that until Congress members from both parties vote to create a special impeachment task force to carry out proceedings, “Intelligence Chairman Adam Schiff lacks the jurisdiction to investigate the Department of State’s conduct of United States foreign policy toward Ukraine. That prerogative belongs to our Members.”

“Official impeachment inquiries are initiated by the adoption of a House resolution empowering or creating a committee or task force to undertake such activities,” McCaul continued. “In both the Nixon and Clinton cases, the Judiciary Committee debated and reported a resolution authorizing the Judiciary Committee to investigate whether there were sufficient grounds to impeach the President, which was then debated and voted on by the full House of Representatives. There have been no such debates or votes in this Congress.”