How to Bring Neighbors Together with a Block Party

Lessons from our Street’s first Block Party in Decades

I’ve been wanting to hold a block party on my street to help neighbors get to know each other and build community spirit.  This post details how our street held our first block party in decades.  My hope is that other streets will learn from this on how to  hold their own block parties.

I’ve being going on regular walks around Akron for over a decade and after a day spent working from home, I often feel like getting some social time.  While on my walks, if a resident seems open to talking I’ll often strike up a conversation.

When I’m on my own street and I see a neighbor, I test their receptivity  and mention the idea of the block party.  If I haven’t talked with them before I point out where I live on the street so they can tell that I’m one of their neighbors and this block party thing is “legit”.

We were able to get 49 attendees to the party, which is quite a high percentage of the neighborhood. 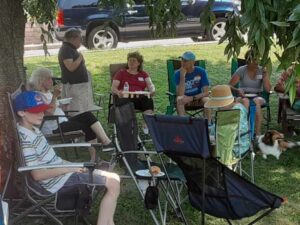 Talking to people in person

I talked with everyone on the street at least 2-3 times.  I don’t think I would have gotten the response I did without the personal touch.  I also got ideas from people on how to make the idea work.  I had the basic concept, but I didn’t have a location or date at the beginning.  The date and location came later after I spoke with people.

My neighbor across the street has a flatter front yard than I do and offered to host the event.  The basic concept was that we would cook hot dogs and hamburgers and everyone would bring a potluck dish.  I had been operating on the idea that everyone would bring what they want, without coordination.  If everyone brought desserts, I was fine with that, but later my co-organizer wanted to know what everyone was bringing.  It took a little bit more work, but it resulted in less duplication.

I followed up the week before to remind everyone, give instructions about the location, etc, and to create an attendance estimate.  Our estimate of 43 adults and 6 children proved accurate and helped us know how many hamburgers and hotdogs to prepare.  The special count for children enabled my retired elementary school teacher neighbor to know how to plan for the children’s games.

Because we made a last-minute decision to get a list of what everyone was bringing, I made a final door-to-door visit making sure everyone remembered the time and location and constructing a list of who was bringing whart.  We avoided having two watermelons and two homemade ice creams and we also discovered people willing to provide some of the hot dogs and hamburgers.

We started with the food at 2pm and people ate under the shade tree sitting on lawn chairs.  The food was on the other side of the yard in the shade, on tables we were able to borrow.  Later, someone suggested we should have started an hour before to allow people time to visit and announce the exact time that eating would begin so people knew what to anticipate.

After most people had eaten their food, we started playing the game: “Who in my neighborhood?”

Q: Who in my neighbor hood grew up in Akron?

Those people stand up and trade spots with each other.

Those people stand up and trade spots.

Q: Who in my neighborhood has ever broken the 25 mph speed limit on Main Street?

Everyone gets up and trades spots.

After the prepared mixer questions are finished, neighbors can shout out their own variant of the questions.

We had a donation box to pay for the bigger ticket items (hamburgers, hotdogs, ice cream) that were more expensive than most people’s contributions.  I think we could have done a better job of informing people about the donation box and what it was going towards because donations didn’t quite cover expenses.  My co-organizer and I financed the difference, which was around $70.

We did not have a rain day alternative, but we did arrange to have spillover to a second house if there proved to be insufficient space at the primary location.

The hosting couple spent the most time preparing on the weekend of the event getting their property ready.  A few of us setup tables and other things an hour before the start time.

I had asked the mayor if we could shut down the street and he was willing, but later he had to rescind the offer because our street gets more through traffic and connects to a neighboring township.  For others in Akron, it’s worth asking if you can get the street closed.  You can get the mayor’s phone number and email on the town web site.

We held the event on Sunday from 2-5 to increase availability and reduce vehicle traffic.

I had a notebook on the food table at the event where people could fill in contact information that they were willing to share.  I was conscious not to push anyone into sharing information.

I’m creating a spreadsheet of names and contact information which I plan to share with neighbors who opted-in.

We invited an outgoing former neighbor couple to come back and participate in our block party.  Both husband and wife were very active in our neighborhood and it felt good to reconnect with them.

One thing I could improve upon was creating a flyer notifying people of the details.  It seems amazing that we pulled off a successful event without any signage  or fliers.   I think if I had reinforced the idea of a suggested $15/family donation we likely wouldn’t have had a deficit.  This could also have been done by mentioning it later in the event to everyone, so that those who came later could hear.  Additionally, the donation box also blended in with the food on the tables.

There is interest in more block parties and one person who wasn’t able to make it has volunteered to be on the next block party committee.  I mostly coordinated this year’s event with a small group of people but I think things could be even better with a committee of people that was formed well in advance.

I think next year’s event could also be made easier using a website like Perfect Potluck to help coordinate the food.  (I heard about this website towards the end of my organizing effort).  I think my approach of talking to everyone in person really helped increase turnout, but now that we have contact information, electronic messaging should reduce the number of in-person visits.