In my last column I tried to describe part of the current controversy over race and K-12 education — the part that turns on whether it’s possible to tell a fuller historical story about slavery and segregation while also retaining a broadly patriotic understanding of America’s founding and development.

In this column I will try to describe the part of the controversy that concerns how we teach about racism today. It’s probably the more intense debate, driving both progressive zeal and conservative backlash.

Again, I want to start with what the new progressivism is interested in changing. One change involves increasingly familiar terms like “structural” and “systemic” racism, and the attempt to teach about race in a way that emphasizes not just explicitly racist laws and attitudes, but also how America’s racist past still influences inequalities today.

In theory, this shift is supposed to enable debates that avoid using “racist” as a personal accusation — since the point is that a culture can sustain persistent racial inequalities even if most white people aren’t bigoted or biased.

Still, this kind of vision would, on its own, face inevitable conservative resistance on several grounds: that it overstates the challenges facing minorities in America today; that it seems to de-emphasize personal responsibility; that it implies policy responses (racial quotas, reparations) that are racially discriminatory, arguably unconstitutional and definitely threatening to the white middle class.

But the basic claim that structural racism exists has strong evidence behind it, and the idea that schools should teach about it in some way is probably a winning argument for progressives. (Almost half of college Republicans, in a recent poll, supported teaching about how “patterns of racism are ingrained in law and other institutions.”) Especially since not every application of the structural-racist diagnosis implies left-wing policy conclusions: The pro-life and school choice movements, for instance, regularly invoke the impact of past progressive racism on disproportionately high African-American abortion rates and underperforming public schools.

What’s really inflaming today’s fights, though, is that the structural-racist diagnosis isn’t being offered on its own. Instead it’s yoked to two sweeping theories about how to fight the problem it describes.

First, there is a novel theory of moral education, according to which the best way to deal with systemic inequality is to confront its white beneficiaries with their privileges and encourage them to wrestle with their sins.

Second, there is a Manichaean vision of public policy, in which all policymaking is either racist or antiracist, all racial disparities are the result of racism — and the measurement of any outcome short of perfect “equity” may be a form of structural racism itself.

The first idea is associated with Robin DiAngelo, the second with Ibram X. Kendi, and they converge in places like the work of Tema Okun, whose presentations train educators to see “white-supremacy culture” at work in traditional measures of academic attainment.

The impulses these ideas encourage take different forms in different institutions, but they usually circle around to similar goals. First, the attempt to use racial-education programs to construct a stronger sense of shared white identity, on the apparent theory that making Americans of European ancestry think of themselves as defined by a toxic “whiteness” will lead to its purgation. Second, the deconstruction of standards that manifest racial disparities, on the apparent theory that if we stop using gifted courses or standardized tests, the inequities they reveal will cease to matter.

These goals, it should be stressed, don’t follow necessarily from the theory of structural racism. The first idea arguably betrays the theory’s key insight, that you can have “racism without racists,” by deliberately trying to increase individual racial guilt. The second extends structural analysis beyond what it can reasonably bear, into territory where white supremacy supposedly explains Asian American success on the SAT.

But precisely because they don’t follow from modest and defensible conceptions of systemic racism, smart progressives in the media often retreat to those modest conceptions when challenged by conservatives — without acknowledging that the dubious conceptions are a big part of what’s been amplifying controversy, and conjuring up dubious Republican legislation in response.

Here one could say that figures like Kendi and DiAngelo, and the complex of foundations and bureaucracies that have embraced the new antiracism, increasingly play a similar role to talk radio in the Republican coalition. They represent an ideological extremism that embarrasses clever liberals, as the spirit of Limbaugh often embarrassed right-wing intellectuals. But this embarrassment encourages a pretense that their influence is modest, their excesses forgivable, and the real problem is always the evils of the other side.

That pretense worked out badly for the right, whose intelligentsia awoke in 2016 to discover that they no longer recognized their own coalition. It would be helpful if liberals currently dismissing anxiety over Kendian or DiAngelan ideas as just a “moral panic” experienced a similar awakening now — before progressivism simply becomes its excesses, and the way back to sanity is closed.

White lives already matter, who needs an event or a group?

To the US police it is apparent ONLY white lives matter.

Here, if you’re baffled this should make it crystal clear. 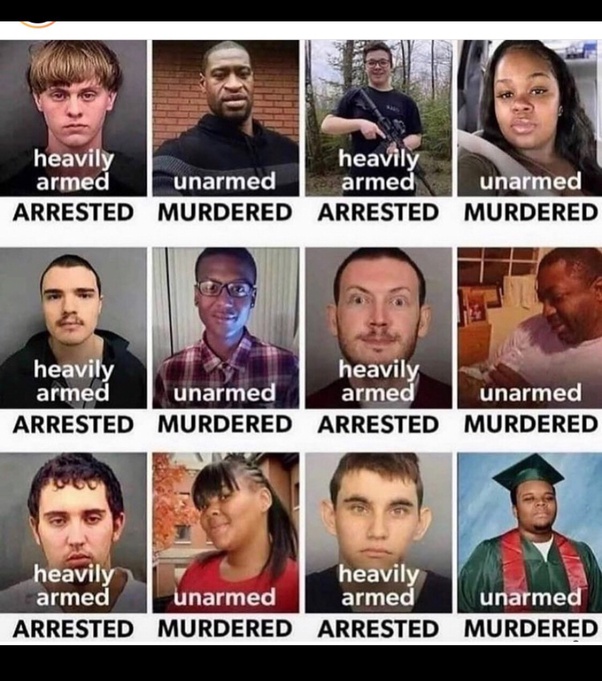 This Karen thought she was safe from the cops. Rick Strom breaks it down. Give us your thoughts in the comments below!

Police officials in Georgia refuse to release the identity of a detective who showed up to the home of a couple and lost his temper. The residents were armed and the officer didn’t like it. It turned into a shouting match. Cenk Uygur and Ana Kasparian, hosts of The Young Turks, break it down. Tell us what you think in the comment section below.

“Earl Cannady and his wife just arrived home from a shopping trip to the local Walmart when their son told them there were cops at the door.

The couple both have licenses for their guns which they were both wearing but that must have spooked the cops because they demanded to know why the Georgia couple had guns.

He shut the door and walked to get his cell phone to begin recording the video that has since gone viral. The officer accused the couple of being involved with drugs, despite the lack of evidence and the insistence that the family is chemical free.

The officer was denied entry into the home because he didn’t have a warrant to search and that’s when things took a turn for the worse.

“Now if you got a problem with those kids, you take it up with those kids, but I’m going to tell you something right now, you don’t got a f*cking investigation on me,” Cannady can be heard on the video saying.”*

Isn’t it remarkable that the establishment that created a system of slavery at home and supports corporate power abroad, including a recent coup in Bolivia.

Recalling the provocation that came midway through a routine traffic stop, Danville police officer Dylan Hayden told reporters Thursday that driver Donald Watkins’ decision to frustratedly point his finger at him was just the green light he needed. “Legally, I’m not allowed to touch the motorist after pulling him over, but when he extended his index finger directly toward me, I knew that gave me the go-ahead right there to take whatever action I deemed necessary,” said Hayden, adding that as soon as he noticed the conceivably threatening hand gesture, he had full authority to skip right ahead to exerting force. “Frankly, I probably would’ve had the okay to rock and roll after he cursed under his breath, but I wanted to be absolutely certain that I was in the clear. Once he pointed his finger at my chest from inside his vehicle, I knew I’d be covered no matter what happened next. He really left the door wide open for me with that one.” Hayden expressed confidence that there was probably someone wanted for robbery who looks similar enough to Watkins to legally justify pulling him over in the first place.