In this episode on On The Margin, Mike is joined by returning guests Jeff Booth & Greg Foss. Jeff & Greg discuss breaking news as the first ever U.S Bitcoin ETF was approved and what this could mean for institutional exposure to Bitcoin. Mike, Jeff & Greg also discuss the recent developments in El Salvador as Bitcoin was made legal tender, The Lightning Network, the deflationary forces & network effects of technology, Bitcoin mining, the difference between Altcoins vs Bitcoin, the outlook for 2021 & the future of Bitcoin.

Facebook Inc. FB +0.04% has big plans to remake the financial system with its cryptocurrency-based payments network. First, it has to get people to use it.

The social-media giant’s plan for Libra—the digital currency it is launching with a few dozen partners including Visa Inc., Mastercard Inc., PayPal Holdings Inc. and Uber Technologies Inc. —is the most ambitious yet to get consumers comfortable with the technology that underpins bitcoin. Facebook’s ultimate goal is for consumers to use Libra to pay their bills, buy things and send money to family members abroad, among other everyday financial transactions.

Facebook has a built-in advantage because of its massive reach; around one-third of the world’s people visit the site monthly. But persuading them to change their habits and adopt a brand-new technology could be a tough slog. Privacy concerns also could hinder adoption of the new currency, though Facebook has said it won’t mingle Libra users’ social and financial data.

Bitcoin is a case in point. Its pseudonymous creator, Satoshi Nakamoto, pitched the original cryptocurrency to the world a decade ago as a way for people to exchange value directly, without the intervention of banks or other middlemen. Yet it has failed to catch on as a payments platform.

Facebook’s toughest sell will be in the developed countries where established payment options such as cash and credit cards remain king, and in places like China, where mobile-payments networks dominate the market. Consumers in countries with limited access to banking services may be quicker to adopt the new currency.

The key will be incentives. Fiat currencies work for a simple reason: Governments decree that their citizens must use and accept them. Digital currencies such as bitcoin and Libra without ready-made communities have to give consumers a reason to use them.

0:00 / 0:00
WSJCoin: To Understand Cryptocurrencies, We Created One
In an original WSJ documentary, markets reporter Steven Russolillo ventures to Japan and Hong Kong to explore the universe of cryptocurrencies. His mission: create WSJCoin, a virtual token for the newspaper industry. Image: Crystal Tai. Video: Clément Bürge

The founding members of the Libra Association, the Geneva-based not-for-profit that will govern the currency, will be tasked with designing and spreading user and merchant incentives, which could include discounts.

Libra’s appeal, at least in the beginning, likely will depend on how many merchants and service providers sign up to accept it, said Dante Disparte, head of policy and communications for the Libra Association. It also needs to work like the established financial networks that consumers are accustomed to using, he said.

What would it take to get you to use Libra? Join the conversation below.

Libra aims “to make the transfer of currency more efficient than the alternatives,” Mr. Disparte said.

Bitcoin’s development wouldn’t have been possible without incentives. The miners that provide the computing power to maintain and secure the network upon which it exists get a shot at winning a competition for newly created bitcoin.

“That was Satoshi’s brilliance,” said Dan Held, a bitcoin investor and entrepreneur. “It wasn’t even the code. It’s that the code aligned incentives among participants.”

Still, bitcoin has struggled to grow beyond its core base of users and aficionados because of technical limitations.

Libra won’t carry the force of law, and it will have little investment value. It is being designed as what is known as a stablecoin, pegged to the value of a basket of fiat currencies that will shield it from the big swings typical of bitcoin and its descendants.

Thus stability and cost—Libra user fees are expected to be minimal—are likely to be its biggest draws, said Eswar Prasad, an economics professor at Cornell University.

But trust could be a stumbling block, he said. The question of Libra’s stability will be tied to Facebook’s reputation, at least in its early years.

Facebook still has a “reasonable amount of trust among its users,” despite concerns about its privacy practices, Mr. Prasad said. But it is competing with the central banks that issue hard currency, he said, and that could be a difficult fight to win.

“For all of Facebook’s wealth and domination of the social-media space, it is difficult to see its currency becoming a durable and significant store of value,” Mr. Prasad said.

1. Below is an infographic on relative financial transaction speeds. 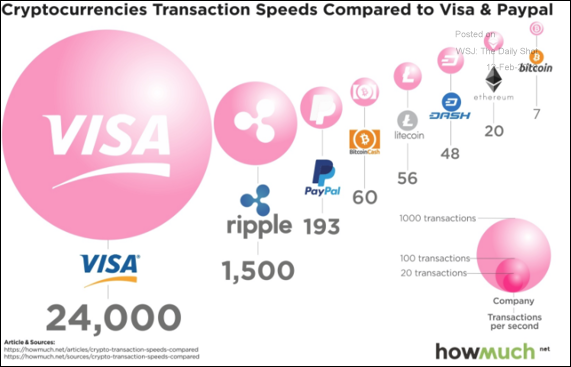 Buckingham Research analyst Chris Brendler thinks there’s plenty that investors still underestimate about the two card companies, which he calls “simply the best businesses we’ve ever seen.” Visa and Mastercard have significant pricing power and are proving to be consistently resilient against up-and-comers in the payments landscape. And they’re poised to keep growing volume and earnings as they further eat into cash and check usage

.. For the most part, Visa and Mastercard have made it so that every relative newcomer in payments has to go through them. The companies struck deals with PayPal, for instance, so that the service would stop dissuading users from funding transactions with their credit cards. And while Apple Pay and other similar mobile-wallet services haven’t really taken off, Visa and Mastercard are well-positioned in case they do, since these tools rely on credit and debit cards, too.