I have been around a lot of rich people in my life, they all have one thing in common with Trump, everything 24/7 is about them. 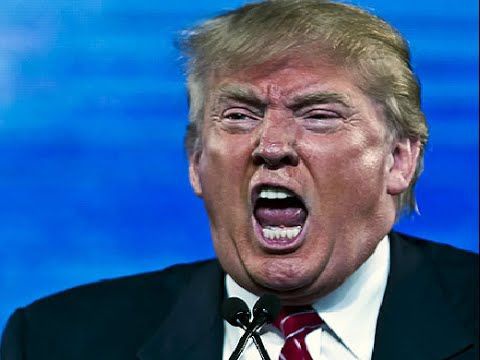 Some of the answers chose to make light of Trump with cartoons, others analyzed him. I simply look at him in the cold light of day as someone who the GOP made a faustian bargain with and rode him for everything they could and once they were done with him can’t believe he won’t go away. But you see, they are playing a game, Trump only has one mode, all about him for his entire life and he won’t change.

The GOP elitists are not sad he is gone, they got their tax cut, they could care less about his bombast and anger, after all most of them do the same thing anytime they are not feted like demigods.

They know the drill, they did to him what he did to them. They kissed his bum and let him rant on because he was useful. He pretended to work like they pretend to work. The goal is simply to always make money and screw as many as possible and get as much attention as possible.

For that he is in a league of his own. There has never been a #2 in his organization, Mike Pence was nothing more than a water boy and he knew it. Even Mike put up with Trump as Trump delivered on the “Christian theocracy’ though every evangelical knew Trump was an apostate.

In the end, what was Trump in real life? Exactly what he was in front of the public. There was no difference from his on camera and off camera personas. That was his greatest strength, he never had to switch and be something he wasn’t. He never had to think am I on camera or not. That is why he never prepared as he never was off camera. That is why he said he ‘worked all the time’ because he never stopped thinking about himself and how he could win or crush someone which for him was winning.

Never forget the depths of the evil of Trump. The GOP unleashed upon the US someone far more sinister than any of us realize to this very day. He was every bit as bad as Hitler, the only thing that stopped him was the US military refused to carry out his smash the protesters and take over the government, the Republican state legislatures said no way we are not overthrowing our own elections, people like Bill Barr were disgusted just enough to walk out after saying no there was no stolen election and most of all

This former president giving candid opinions in his early 30’s. There are many clues and cues there suggesting the best way to approach him. One in particular is that he seems to thrive on attention and acknowledgement, perhaps more than most. Psychotherapy provides that better than anything.

I suspect that if guaranteed absolute privacy and confidentiality, accurate empathy and unconditional positive regard, he would speak honestly about his feelings — assured that no one would ever hear what he was saying.

More than the average person, he would in effect be “talking to himself,” perhaps with the therapist as more like a safe, respectful prop. We can’t know.

I would jump at the chance to Donald Trump’s therapist, but probably not it if was mandated, since that would not have the element of utter privacy. If he wanted to see someone who would never even acknowledge the therapy took place, and who could provide absolute privacy? I’d get in line for sure.

–Donald Trump is interviewed by Fox News’ Chris Wallace and it becomes a historic fiasco, with Trump interrupting the interview to try to find data that doesn’t exist, Trump referring to World Wars I and II as “beautiful,” Trump accusing the interviewer of being unable to do as well as Trump in a cognitive test, and much more

There is always a photograph, and so naturally there is a photograph. This one was taken during the summer of 2008, on a golf course owned by President Donald Trump in New York’s Westchester County. Despite whatever accidental prescience the image might since seem to have acquired, the photo itself was and remains just what it is: artless proof that some wealthy and powerful men—in this case Rudolph Giuliani, Donald Trump, Michael Bloomberg, and Bill Clinton—had at some point posed together on a golf course with their respective Big Bertha drivers out.

It’s the sort of photo that the principal figures have had taken thousands of times over the course of their public lives and equally public retirements. For people of this stature, taking pictures like this with other members of their micro-caste of puffy swells—variously seared pink or golden brown, buzzcut and triangular or pillowy and spheroid, foreign or domestic—is something like their job. There’s no aesthetic merit to these photos, which invariably involve three or four or more pairs of golf shoes and varying shades of incipient sunburn—and sometimes, as this one does, multiple pairs of centimillionaire knees. Aesthetic merit of course plays no role in the staging of such photos; rather, they serve to document a convergence of egos and interests. In functional terms, they mark a random historical moment in roughly the same way and for roughly the same reasons that hostage-takers photograph their captives holding up the front page of a given day’s newspaper. Everyone in the shot can point to it as proof of themselves being in the proper company and the correct milieu. Images like this do not exist to be looked at so much as they exist to be seen, or noticed.

Trump is halfway into or out of a grin, and sagging to leeward like a butter sculpture left out in the sun.

And that’s what we have here. Giuliani, far left, looks as ever as if he has somehow been spilled into his clothes; he is turned such that he is grimacing towards a camera that no one else is facing. Trump is halfway into or out of a grin, and sagging to leeward like a butter sculpture left out in the sun. A head shorter and directly to Trump’s left, Bloomberg is trim, mirthless, and more deeply tan than any public official has a right to be. Bill Clinton had not at this point embarked on his vegan glow-up, and so looks jocular and fluffy in shorts and a pastel golf shirt with implausibly girthsome sleeves. Most versions of this photo that have circulated over the days since Bloomberg announced his interest in joining the field of contenders for the Democratic presidential nomination crop former Yankees Manager Joe Torre and professional Yankees fan Billy Crystal out of the photo entirely, even though the picture was taken at Torre’s own charity golf event.

That is rude, but it fits. Characters like Torre and Crystal are incidental to photos like this, or anyway useful mostly as local color, or a spritz of local flavor atop the expensive lobes of foie gras at the center of the image. The photos are proof that various powerful people once stood next to each other, more or less as peers, and they are to be hung up like a diploma—something for guests to see on the wall of a long corridor in some cold and fancified house, or notice in an office in which, as a matter of course, no actual work gets done. A bunch of rich old men, together, their respective pendulous drivers arrayed before them such that their identical heads are nearly touching, but not quite. Well, doesn’t that beat all?

In a better world, such photos might still exist. The people in them would not have become nearly as rich or unaccountable or powerful as they are in this one, but there’s no reason to think that they would not have found each other in some refrigerated clubhouse or hotel dining room or breakout session or cigar bar. In that world, these men would not be any better than they are in this one, because they are what they are by nature—mutants of appetite and ego, and outliers from the rest of humanity in terms of both the depth and the breadth of their need. But in that other world, in which they are merely rich and terrible, they would threaten only the good times of the other people sharing those spaces with them.

These vainglorious eternals somehow shamble on atop the culture even in their curdling dotage.

In this one, though, these vainglorious eternals somehow shamble on atop the culture even in their curdling dotage. From that commanding position they do what they do—pursue their endless blowsy feuds, scheme and carp, watch television and go on television and, where the opportunity presents itself, blithely commit various high crimes and misdemeanors. Far above the struggle and insecurity of everyday life, these brittle titans squabble and gossip and go through acrimonious and highly public divorces; for all the ways in which the toxic runoff of inequality can currently be felt in the culture, the fact that the cheesy churn of rich and petty men drifting into and pissily out of each other’s good graces now so distorts our politics is among the most enervating. It is one thing to see so much of our popular culture narrowing and flattening to suit various billionaires’ crude and idle whims, but it’s something else to realize that the political life of the richest and most powerful country on earth is in large part determined by the spats and obsessions of a super-class of aged and lazy lords, all of whom consider themselves peers of each other and virtually no one else.

It’s not a constitutionally enumerated power of the office, but presidents invariably shape the culture in ways that reflect their own values or anti-values, politics, and vibe. Clinton’s America applauded itself from the apex of boomer self-assurance; Bush’s was gilded and blustering and fragile, both strident and utterly bereft of ideas; Obama’s was cosmopolitan and smart from afar and naively inclined to assume facts not in evidence about the trajectories of various important things. It makes sense that Donald Trump’s America would be just the country for these old men—that the machinations and endless feuds of the tabloid undead would crowd and then devour everything else.

If Trump has values beyond the protection and promotion of his hideous and hungry self, they are these tabloid-driven rules of engagement. If Trump has peers—if there are people that matter to him beyond those who might be instrumentalized to advance his pursuit of more of everything—these are those people. Bloomberg will not be the next president of the United States, because virtually no one alive wants him to serve in that role. And yet he and his untouchable peers, who have been allowed through various long-standing failures to have so much more than any person ever should, will spend millions of dollars not in pursuit of any particular set of policies or even the office itself, but out of habit. Look at that photo again, and it is clear that none of the people in it are really friends—but just as important, they’re not enemies in any meaningful way, either. If you know the roles they play in our politics, the people in the photo seem like an unlikely foursome—the lumpy blowhards who backed into fascism for lack of any conviction deeper than a distaste for those with less than them, grinning alongside the savviest and most state-of-the-art ur-moderates. Someone who didn’t understand how weak everything around them had become, or how high these duffers had been allowed to rise as a result, might just look at the photo and see some old guys heading out to play some golf, and maybe bet a little something on the outcome to make things interesting.