Raoul Pal – Bitcoin May Have These Problems Later!

The coronavirus has thrown us into truly unprecedented times. Most countries have enforced a lockdown, and global travel has ground to a halt, and this, in turn, has had an enormous impact on the economy.

Stock markets all over the world experienced huge volatility. Wall Street suffered its worst day since ‘Black Monday’, oil prices went negative for the first time in history and governments all over the world have been implementing extreme fiscal and monetary policies.

Many analysts have suggested that rather than coronavirus being the cause of this economic downturn, instead, it was merely the pin that popped the bubble and the enormous debts that have been amounting since long before the 2008 global financial crisis was a disaster waiting to happen.

So, how do we get out of this mess? Who stands to benefit from government money printing? Who has to pay this money back? And, why the fuck is Steve Mnuchin, the Secretary of the Treasury?

To answer these questions and more, I am joined by leading finance experts: Andrea Ferrero, Andreas M. Antonopoulos, Caitlin Long, Ben Hunt & Raoul Pal. We look at the corruption and mismanagement of the economy by central banks and governments.

This is an episode of Off The Chain with host Anthony “Pomp” Pompliano and guest, Raoul Pal, the CEO of Real Vision Group.

Real Vision CEO, Raoul Pal, examines via Skype the recent turmoil with an international cadre of outspoken experts: monetary economist George Selgin, George Goncalves of The Bond Strategist, Scott Skyrm, executive vice president at Curvature Securities, and Dr. Z. Barton Wang of Barton Research. Join Raoul on this voyage of discovery as he discusses repo and more with some of the sharpest minds in finance. Filmed on January 31, 2020, in Grand Cayman.

< 8 min: I tend to agree with the Fed that the current repo operation is not QE, but that having a standing repo facility handles high demand (like at the end of the month)

There are multiple factors that combine to increase liquidity demand.

12 min: The balance sheet is never going to go down.

13:30 min: The Fed and Treasury don’t appear to be talking.  One theory is that Mnuchin is trying to force the Fed’s hand

17:26 If we have a recession, we will see genuine QE that no one can deny.

I worry that they will resort to QE even if there isn’t a recession.

~19:30 There is a lot of leverage that keeps asset prices high and liquidity is necessary to support this.

I’ll all for the Fed providing liquidity, but there should be a penalty rate

20:10: I agree that QE will happen and it will arrive quickly.

The next QE will be done in such a technical way as to “bore” the public.

33 min: The Equity Markets believe they are doing a version of QE.

They are going to have to steepen the curve.

44 min: Most of the Hedge Funds that want cash want it first thing in the morning, but other players come in later (New York time)

48 min: Is excess leverage behind this?

55:50: So what you’re saying is that they can’t run such a large deficit.  In a recession they could run a larger deficit.

1 hr 04 min: Why is the (Fed) balance sheet affecting equities?

According to Basel 3, Banks need assets at the Fed to participate in Repo market

The Fed is now going to be permanently involved.  They messed up and now are going to oversupply, which they don’t view as a big problem.

They have tons of ammo to dump money into the economy right before the election.

If the US Dollar Collapses, European and Japanese will not be able to play in Equities so much and Equities could fall.

Bonds give better signals about the economic cycle than Stocks.

1 hr 18 min: It all depends on Treasuries (for equity) they have so much cash they can flood the market with $40 billion any time they want.  Their action is the biggest contributor to volatility.

Is Mnuchin essentially using this as an economic weapon in his ability to micromanage the economy? (before the election)

I don’t know but he has a lot of ammo.  It looks suspicious.  We should ask him in his press conferences.

If he decides he wants to put money in his checking, there’s nothing the Fed can do about it without blowing up the markets.

This is unprecedented except during the financial crisis.

Treasure has become the marginal provider of liquidly and that who we should watch.

There is a potential dollar collapse in the future.  Markets can’t get enough dollars.

Raoul Pal is a former hedge fund manager who retired at age 36 but remains actively involved in the world of macroeconomics and finance. In recent years, he started a finance news and content service called Real Vision.

In a video posted on YouTube on August 14th, Pal discusses his case for a recession in the next year or so as well as a very alarming scenario he calls the “doom loop.” It’s a fascinating and frightening thesis, and I find it persuasive. Here’s the line of reasoning:

(2) As a result, all sorts of market and government actors increase their debt loads. Corporations, especially, took advantage of falling rates to refinance and take on more debt. 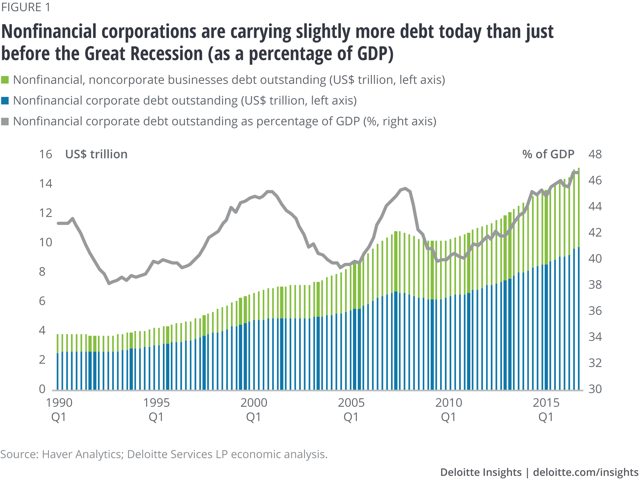 (3) Some of this debt buildup has been for acquisitions or mega-mergers, but much of it was taken on simply for share buybacks. See, for instance, this chart showing the way in which debt issuance and share buybacks became tightly correlated right around the time that the Fed Funds rate bottomed near zero. (See my article addressing this subject here.) 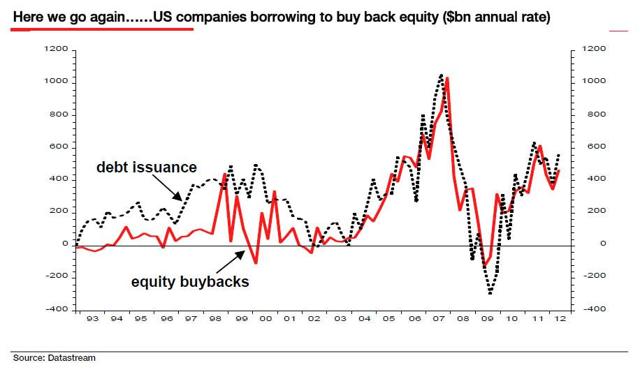 Debt-funded buybacks have served as a convenient way for corporate executives to lift earnings per share, thus meeting guidance more regularly and reaching the targets for their performance bonuses more often. (I wrote about this subject here.) What’s more, an SEC study found that insider selling tended to coincide with the announcements or implementation of buybacks.

(4) Indeed, if you look at the performance of U.S. stocks versus any other country or world region’s stocks, you’ll notice a stark difference. U.S. stocks have soared ahead of the competition. It turns out that this is largely because of buybacks, as corporations themselves have been the biggest net buyers of corporate stock since the Great Recession: 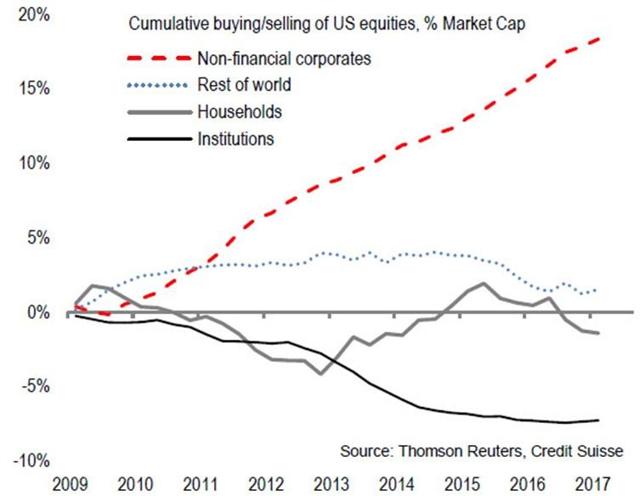 Notice that institutions (including pension funds) have been net sellers of U.S. equities since the recession. This likely means that pensions have been forced to sell many of their assets to fund benefit payouts but have sold other assets such as Treasuries at a faster rate than equities.

(5) Who is buying all this debt being issued to fund buybacks? The answer, in large part, is pensions. Mainly corporate pensions: 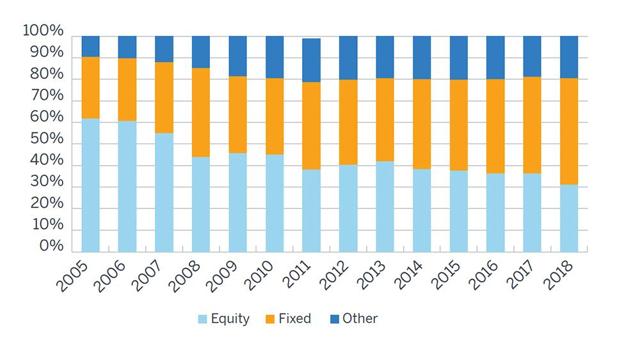 Writes Mark Johnson: “This uptick in bond buying has caused corporate pension funds to play a more influential role in the bond market, since pension managers tend to hold bonds for the long term. As more and more companies adopt the strategy of buying more bonds, pension demand could total $150 billion a year. It is estimated that corporate pension funds buy more than 50 percent of new long-term bonds, up from an estimated 25 percent a few years ago.”

BBB-rated corporate debt has grown to be roughly half of all corporate debt outstanding. That’s one (small, for some companies) step above junk status.

(6) During a recession, much of this investment grade debt (Pal guesstimates 10-20%) will be downgraded. But remember: pensions cannot own junk bonds. If BBB-rated debt on their books gets downgraded, they will be forced to sell it, even at a loss. If multiple downgrades happen quickly in succession, the supply of newly labeled junk bonds will overwhelm demand from other market buyers of those debt instruments. This could lead to a fire sale scenario, in which the prices of junk bonds plunge as pensions dump huge supplies into an unsuspecting market.

(7) Not only would pensions have to accept a fraction of their cost basis for these former investment grade bonds, they would also see their primary revenue stream — tax revenue — slacken during a recession. Tax receipts, after all, are as cyclical as the business cycle. When individuals and businesses aren’t making as much money, there is less available to be taxed. This would diminish demand for corporate bonds, which would cause corporate bond yields to spike.

(8) All of this chaos in the credit markets will make it very difficult for corporations to issue debt at anything other than high rates. This will cause the costs of new debt to soar high enough for buybacks to become prohibitively expensive. Moreover, cash flows will dry up, as they do in every recession, and thus every potential source of funds to use for buybacks will disappear.

(9) If the previous points play out, the biggest net buyer of U.S. equities over the last ten years will no longer be a buyer. “The largest buyer will have left the room,” as Pal says. In fact, publicly traded corporations may actually be net issuers of shares during the next recession as they were in 2008-2009.

In the words of Jesse Colombo, “If the stock market performed as poorly as it did in 2018 with record amounts of buybacks to prop it up, just imagine how much worse it would be if buybacks were to slow down significantly or grind to a halt?”

I don’t see how the preceding chain of events playing out as described would not ultimately result in a very nasty stock market crash. Whether it’s a relatively quick crash like in 2008-2009 or a bit more drawn out like from 2001-2003 is unknown. Either way, I see the above scenario as plausible. Disturbingly so.

Since I’m an income-oriented investor, my preferred method of hedging against this possible crash scenario is to hold ample cash and ultra-short term bond funds. That way, if this scenario does play out, I will be prepared to buy assets at fire sale prices with yields higher than I might ever see again in my lifetime.

Raoul Pal’s thesis is fascinating, but it could be wrong. What I’m much more certain of is that the Fed bears the majority of the blame for the underfunding of pensions and thus for putting us into a situation in which Pal’s thesis would even be possible.