PHILADELPHIA—Debt collectors are making a comeback.

Debt-collection lawsuits have increased in some state and municipal courts, following a decline during a regulatory tightening after the financial crisis. Debt purchases by collectors are also rising, according to data by large publicly traded debt-collection companies.

“There was some fear. Now there is more clarity in the market,” said Jan Stieger, executive director of Receivables Management Association International, a trade group of debt buyers. She said industry debt purchases have rebounded in the past two years or so, with several buyers returning to the market in early 2019.

Consumer advocates said the use of some aggressive collection tactics is also on the rise, including the pursuit of “zombie” debts, or debts that are years and sometimes decades old.

“Our courts are inundated,” said Laura Smith, an attorney for Community Legal Services of Philadelphia. Collection filings at the Philadelphia Municipal Court nearly doubled to 16,200 cases last year from 2016, she said.

The push to collect on delinquent debts comes as U.S. household debt hit record levels—reaching $13.67 trillion in the first quarter of 2019, according to the Federal Reserve. Default rates are also up for credit cards, auto and student loans. Industry executives and consumer advocates also point to changes at the Consumer Financial Protection Bureau. The bureau sought to restrict debt-collection activity during the Obama administration. Under President Trump, it has eased enforcement activities and is working on an overhaul to a debt-collection rule.

A CFPB spokeswoman didn’t respond to requests for comment.

Debt buyers purchase large packages of delinquent consumer debts, paying a few pennies on the dollar, and pursue borrowers for the face value of the debt plus interest.

AM Solutions LLC, a debt-buying company, sued Adolph Muir and Doris Muir in 2017 in a Philadelphia court to foreclose on the couple’s home and collect more than $83,000 for allegedly defaulting on a $6,500 mortgage dating to 1983. The debt was acquired in 2016 from a defunct mortgage lender.

The Muirs said they paid $4,500 cash for the house in 1978 and didn’t later take out a mortgage against the property, a red three-story row house in North Philadelphia.

“I kept saying I’d lose my house,” said Mrs. Muir, 79 years old. “I lost my appetite. I lost 30 pounds.” She said she spends much of her time looking after her husband, a former building doorman who is 93 and blind. 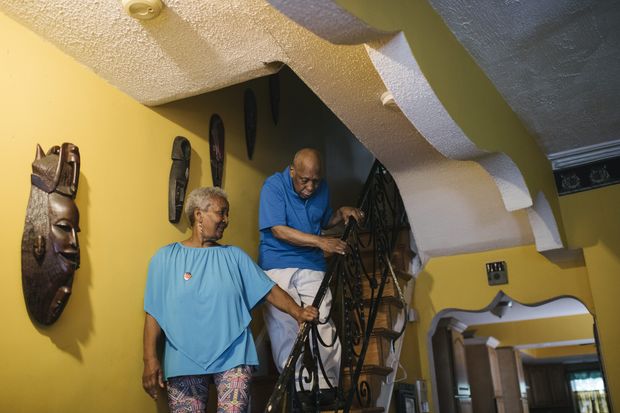 Doris and Adolph Muir paid cash to buy their red three-story row house in 1978. They say they never heard about the alleged mortgage until a debt collector wrote to them in 2017.PHOTO: HANNAH YOON FOR THE WALL STREET JOURNAL

The Muirs contested the proceeding and 15 months later prevailed in court. The company had a copy of an old mortgage but didn’t provide account documentation addressed to the Muirs.

Collection lawsuits often end as default judgments in favor of the collector because defendants don’t show up in court, sometimes unaware of the claims, according to experts. People also come to court without a lawyer, limiting their ability to defend against questionable debts.

In October 2018, Kate Goodwin, a 65-year-old Philadelphia medical aide, said she noticed her bank account was nearly empty because of an unexpected $215 withdrawal. Her bank said it was legal fees related to a debt collector’s garnishment request.

Encore’s Asset Acceptance had a default judgment against her for a $2,180 debt linked to New York & Co . , a clothing company. Encore said Ms. Goodwin opened the account in 2000 but stopped payments in 2008. She didn’t appear in court in 2011 to defend herself, leading to the default judgment.

Ms. Goodwin said she remembered getting the card to buy work clothes, but didn’t think about it after a 2005 divorce from her husband, whom she said paid the bills. She said nothing appeared in her credit reports, and she received no information about the lawsuit. “I truly thought we paid it off,” she said.

Ms. Goodwin said she contested the debt and settled with Encore for $400.