With every major financial recovery since the second World War beginning in a place of greater debt than the one before it, how could we not have foreseen the financial crisis of 2008? In this episode of Meet the Renegades, economics professor and author, Michael Hudson argues we did.

How could an economy that created so much debt also save the banks rather than the economy itself, following the 2008 financial crisis? Michael discusses the phenomenon of debt inflation and how the economic curriculum should change.

“If you’re teaching economics, you should begin with the relationship between finance and the economy, between the build up of debt and the ability to pay.”

Michael discusses the ‘Great Moderation’, a common misrepresentation of a healthy economy in which job productivity was increasing, labor complacency was at an all-time low was a complete myth. Michael argues that ‘traumatized’ workers were too in debt to fight for better working conditions leading up to the 2008 financial crisis and how this reflects neo-classical ideas.

Michael offers solutions – urging the importance of writing down the debt and keeping basic services in the public sector, ridding the economy of financial tumors through a proper tax policy based upon the this public sector model.

The President’s remarks at the recent State of the Union aroused my curiosity:

Since my election, the net worth of the bottom half of wage earners has increased by 47 percent — three times faster than the increase for the top 1 percent.

This prompted the following questions:

This sounds like it would make a good story for  The Indicator from Planet Money.

Distribution of Household Wealth in the U.S. since 1989

The decadelong economic expansion has showered the U.S. with staggering new wealth driven by a booming stock market and rising house prices.

But that windfall has passed by many Americans. The bottom half of all U.S. households, as measured by wealth, have only recently regained the wealth lost in the 2007-2009 recession and still have 32% less wealth, adjusted for inflation, than in 2003, according to recent Federal Reserve figures. The top 1% of households have more than twice as much as they did in 2003.

This points to a potentially worrisome side of the expansion, now the longest on record. If another recession comes, it could be devastating for people who have only just recovered from the last one.

Wealth, also called net worth, is the value of assets such as houses, savings and stocks minus debt such as mortgages and credit-card balances. Net worth is different from income, the cash a household receives each month such as wages, dividends and government benefits. It is common for countries to have a highly skewed wealth distribution. Nonetheless, in the U.S., wealth inequality has grown faster than income inequality in the past decade, making the current wealth gap the widest in the postwar period, according to a study by Moritz Kuhn, Moritz Schularick and Ulrike Steins, economists at the University of Bonn.

Behind this trend: More than 85% of the assets of the wealthiest 1% are in financial assets such as stocks, bonds or stakes in private companies. By contrast, slightly more than half of all assets owned by the bottom 50% of households comes from real estate, such as the family home. Economic and regulatory trends over the past decade have not only favored stock over housing wealth, but have also made it harder for the less affluent to even buy a home.

Since 2009, home prices have outpaced incomes, making it harder for families to purchase their first home. 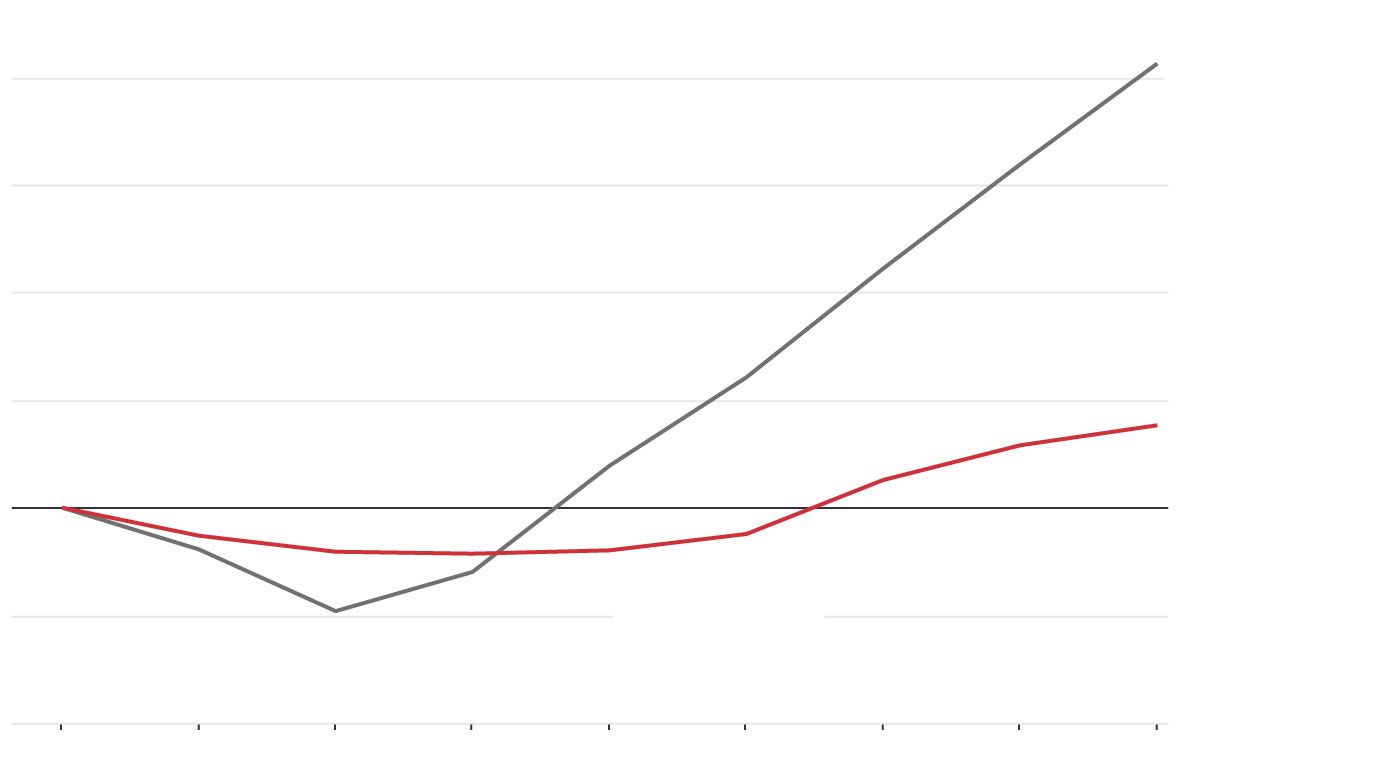 Percentage change in price of a starter home

Until the mid-2000s, the net worth of households across the wealth distribution increased at roughly the same pace, keeping inequality stable. That started to change when housing prices took off in the early 2000s. For the bottom 50%, rising home values were more than offset by mortgage debt, which almost doubled between 2003 and 2007. For the top 1%, debt was flat between those years. When the housing bubble burst, many less-affluent households saw housing wealth wiped out; some lost their homes altogether.

Today, the bottom half of American households aren’t carrying so much debt compared with the prerecession peak, after adjusting for inflation. And starting in 2012, a recovery in home prices has allowed their net worth to inch up. But house prices, adjusted for inflation, have yet to reach their 2006 peak, according to the S&P CoreLogic Case-Shiller index. Meanwhile, a decade of rising equity prices has buoyed the 1% wealthiest households, pushing the value of their financial assets up 72% since the recession, after adjusting for inflation.

Structural economic forces have affected the wealth of the rich and the lower-middle class differently. The Fed kept interest rates near zero and bought bonds in the years after the crisis to revive the economy, in the process amplifying the run-up in asset prices. “Who owns that stuff? Rich people,” said Karen Petrou, managing partner at Federal Financial Analytics.

Meanwhile, the share of families in the bottom half who own a home has fallen to about 37% in 2016, the latest year for which data are available, from 43% in 2007, according to the Fed. Homeownership among the entire population has crept up since 2016.

For those who lost a house during the recession or never had one, getting a toehold in homeownership has become more difficult. Partly because of regulations designed to prevent another crisis, banks have toughened credit standards and down-payment requirements, said Susan Wachter, a University of Pennsylvania economist. Had the looser, prerecession credit standards stayed, the proportion of Americans who own their home would have been 5.2 percentage points higher in 2010-2013, a study by Ms. Wachter and three co-authors estimates.

Why the Economic Expansion Missed Many Americans
00:00 / 11:39
How the Other Half Lives
The net worth of the bottom half of American households has been slow to come back from the recession.
Wealth for the bottom 50% of Americans

RECESSION22.533.544.555.566.5$7 trillion20042006200820102012201420162018
Note: Figures shown in 2019 dollars
Source: Federal Reserve
Danny Dougherty/THE WALL STREET JOURNAL
When the housing bubble burst, asset values plummeted, while debt fell much more slowly.
In 2010, the bottom 50% of American households had more debts than assets.
Wealth grew as the recession ended, as assets outpaced debt.
In recent years, the growth in assets has outpaced debt, allowing net worth to recover.
Households with little wealth, however, are more exposed to the vagaries of the economy. Areas that saw a bigger drop in housing wealth after the recession also suffered a sharper decline in consumption, according to research by economists Atif Mian, Kamalesh Rao and Amir Sufi.

How can lawmakers address the gap in household wealth, if at all? Join the conversation below.

Leticia Segura ’s house in the West Humboldt Park neighborhood of Chicago lost about half its value during the recession, she said. Today, it is worth about $250,000, still almost $30,000 short of its value in 2007, she said.

Ms. Segura and her husband, Jesus, almost lost the home to foreclosure during the crisis after Mr. Segura lost his job and the couple fell behind on mortgage payments. A government program helped the couple get current, but they remained underwater on their mortgage until just a few months ago, meaning they owed more than their home’s value.

Today, both have new jobs and Ms. Segura feels more comfortable financially. But the couple remains cautious. They have set aside some money to cover the mortgage for three or four months should disaster strike again. “After that we’d just have to pray,” she said.

Is it more similar to the top 1 percent or the working class?

Have upper-middle-class Americans been winners in the modern economy — or victims? That question has been the subject of a debate recently among economists, writers and others.

On one side are people who argue that the bourgeois professional class — essentially, households with incomes in the low-to-mid six figures but without major wealth — is not so different from the middle class and poor. All of these groups are grappling with slow-growing incomes, high medical costs, student debt and so on.

The only real winners in today’s economy are at the very top, according to this side of the debate. When Bernie Sanders talks about “the greed of billionaires” or Thomas Piketty writes about capital accumulation, they are making a version of this case.

.. “What do the upper middle class care most about in my district? They want a pluralistic America that is engaged with the world and embraces technology and future industries. What they don’t want is a backlash to diversity, a backlash to globalization, a backlash to technology.”

This is a ringing indictment of our global economic system, which is failing the vast majority of humanity. Our world is richer than ever before, but virtually all of it is being captured by a small elite.