Wayne LaPierre, the chief executive of the National Rifle Association, has confronted threats from all sides this year.

He faced a revolt from the N.R.A.’s

that quickly became public. New documents reviewed by The New York Times show that the effort against him was even wider in scope, drawing in three outside law firms working for the N.R.A. and at least one in-house attorney. A wave of embarrassing leaks showed that Mr. LaPierre billed a contractor hundreds of thousands of dollars for bespoke suits and foreign travel, as well as some of his wife’s makeup costs.

Then this month, two mass shootings galvanized the gun control movement and prompted President Trump to float the possibility of expanded background checks, which is anathema to the gun lobby.

But Mr. LaPierre, who has run the N.R.A. since 1991, has so far survived all of the internal challenges. And he has continued to successfully advance his group’s uncompromising agenda. This week he appeared to personally persuade Mr. Trump to resist significant measures sought by Democrats and gun control advocates.

Now Mr. LaPierre is continuing to purge opponents. On Thursday, the N.R.A. dismissed its longtime outside counsel, Charles J. Cooper, the chairman of the Washington law firm Cooper & Kirk, people with knowledge of the decision said. A second outside counsel and a top in-house counsel resigned. The departures come after an internal inquiry showed that the lawyers were involved in an effort to undermine Mr. LaPierre.

The N.R.A. is also considering halting payments to its former second in command, Christopher Cox, who left in June but is still on the payroll, said the people, who insisted on anonymity to discuss internal matters.

The N.R.A.’s apparent success in fending off stricter gun regulations represents an important show of strength for Mr. LaPierre after months of damaging turmoil. And it shows that even in a diminished state, the group wields vast influence over the Republican Party, and particularly President Trump, after spending more than $30 million to help get him elected.

N.R.A. officials have said the rebellion was sparked by Mr. LaPierre’s decision to pursue an internal audit of contractors. The infighting became public in April, when Oliver North departed as the group’s president after seeking his own financial review and being accused by Mr. LaPierre of trying to extort him. Mr. Trump urged the group to “stop the internal fighting, & get back to GREATNESS — FAST!”

Previous reporting by The Times and others has chronicled the internal tumult around Mr. North’s departure. But the new documents show a deeper level of coordination than was previously known in the effort against Mr. LaPierre, with extensive discussions between Mr. North’s allies and the N.R.A.’s own outside counsels. Mr. Cooper and other lawyers exchanged emails urging leaks and countermeasures that would undermine Mr. LaPierre’s strategy. At one point in April Mr. Cooper wrote another lawyer in frustration, saying, “No one on our side will leak.”

The documents also show how Mr. LaPierre scrambled to shore up his standing, reaching out to board members for support. And handwritten notes taken by an aide to Mr. LaPierre, scrawled on a yellow legal pad, detailed what the N.R.A. says were threats made by Mr. North to force Mr. LaPierre to resign. There would be revelations about “sexual offenses” by one of Mr. LaPierre’s colleagues, about spending on “Wayne/clothing” and luxury travel. Mr. North sought the “immediate resignation of Wayne,” the notes said, adding, “Window is short.”

Mr. Cooper, in a statement on Thursday, said, “Throughout the over three decades in which I have represented the N.R.A., I have adhered to the highest standards of professionalism.” He added that he owed an “ethical duty of loyalty to the N.R.A. itself” and not to “any individual officers or directors.”

Michael Volkov, an outside counsel who resigned Thursday, declined to comment, as did Brendan Sullivan, a lawyer for Mr. North.

In legal filings, Mr. North’s lawyers have said that suggestions he took part in a coup attempt against Mr. LaPierre are “fictitious,” and that he had legitimate concerns about “potential financial misconduct” and was thwarted by Mr. LaPierre’s “total dictatorial control.”

Mr. LaPierre said in a statement that he was disturbed “that the N.R.A.’s supposed ‘friends’” engaged in what he called a “scheme to harm our Association,” and said Mr. North “abused the trust” of the gun group.

A spokeswoman for Mr. Cox referred to an earlier statement, when he said allegations that he was complicit in a coup attempt against Mr. LaPierre were “offensive and patently false.”

Mr. LaPierre, 69, evolved from a wonky and introverted lobbyist to become the unyielding face of the gun rights movement in America. Married without children, he has made the N.R.A. his life’s work, framing it as a civil rights issue, and has been reluctant to step aside. But the leaks have taken a toll: Even Fox News, a reliable sanctuary, attacked him this week, with a host describing him as “an odious little grifter.”

In the aftermath of the shootings in El Paso and Dayton, Ohio, this month, Mr. LaPierre reverted to a familiar N.R.A. playbook: The group focused on issues like mental health rather than guns themselves. Mr. LaPierre lobbied Mr. Trump behind the scenes, including in a 30-minute phone call Tuesday after which Mr. Trump also referred to the shootings as “a mental problem” and accused Democrats of wanting to “give up the Second Amendment.”

Still, Mr. LaPierre’s influence will continue to be tested. The Republican-controlled Senate remains a reliable ally in fighting off new restrictions. But the gun control movement has begun to catch up, with well-funded backers like Michael R. Bloomberg, and in the 2018 midterm election cycle, gun control groups outspent the N.R.A.

The rebellion inside the organization was ultimately about money and power. And it featured a high-stakes tussle between Mr. LaPierre and Mr. North — an icon of the right who was involved in one of the most notorious political scandals of the 1980s — for control of one of the country’s most influential, and incendiary, lobbying groups.

At the center of the revolt was the group’s advertising firm, Ackerman McQueen, which had advised the organization for decades. 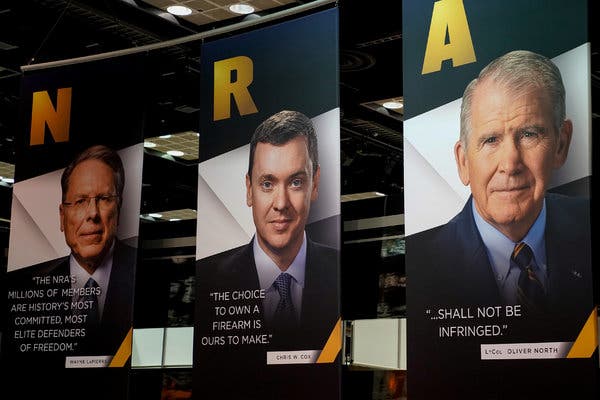 New documents show how a dispute over the N.R.A.’s access to Ackerman’s financial records escalated tensions between Mr. LaPierre and Mr. North. Though the gun group’s presidency is ceremonial, Mr. North began requesting documents related to an internal inquiry into Ackerman. In February, Mr. LaPierre essentially told Mr. North to stay in his lane. In a previously undisclosed letter he wrote, “Because you are an employee of Ackerman McQueen, and have a conflict of interest, I request again that you kindly cease and desist from any further involvement.”

Dividing lines took shape as Ackerman and Mr. North aligned with Mr. Cooper and other outside counsels. By early April, Mr. LaPierre was moving to consolidate support. Another prominent outside N.R.A. lawyer, J. Steven Hart, warned Mr. Cooper and others in an email that “Wayne is making calls to board members at a rapid pace,” adding that Mr. North should do the same.

On April 12, the N.R.A. sued Ackerman, saying it had concealed details about its spending. Many insiders were caught off guard. After an Ackerman attorney sent the lawsuit to Mr. Cooper, he responded, “OMG.”

Allies of Ackerman hatched countermoves, including a plan to create a committee to investigate the group’s finances and expose Mr. LaPierre’s billing practices.

The documents reviewed by The Times also show the extent to which a second rivalry was brewing, between Mr. Cooper and William A. Brewer III, a Democrat whom Mr. LaPierre had hired a year earlier. Mr. Brewer ascended quickly and began getting all of the significant legal work, including several congressional and state inquiries.

Mr. North has said that Mr. Brewer’s bills were “draining N.R.A. cash at mind-boggling speed.” But Mr. Cooper is also expensive, charging $1,350 an hour, compared with $1,400 for Mr. Brewer, people with knowledge of the billing said.

Before proposing the special committee, Mr. North called a close aide to Mr. LaPierre, urging her to tell her boss that he needed to resign. If he did not, Mr. North warned that damaging information would be released about Mr. LaPierre’s spending. If he did, Mr. North would help arrange an “excellent retirement” package, according to the aide’s handwritten notes. A second N.R.A. official also overheard the call.

Mr. LaPierre refused to resign, viewing the call as an extortion attempt. Later that day, the aide emailed Mr. North with a blunt response.

“This note confirms that he will not endorse you for another term as N.R.A. president,” she told him.

With the board lining up behind Mr. LaPierre, the effort to remove him quickly stalled. In a text message later that evening, David Lehman, Mr. Cox’s in-house counsel, wrote to Mr. Cooper: “You should call Ollie this evening. Things have turned.”

Two days later, on April 26, with the group’s annual convention underway in Indianapolis, Mr. Cox texted Mr. Cooper, all but conceding failure in the effort to weaken Mr. LaPierre. “I fear we are not changing the tides,” he wrote.

The next day, The Times reported that Letitia James, the New York attorney general, had opened an investigation into the N.R.A.’s tax-exempt status.

“This is a debacle,” Mr. Hart, who had just been dismissed by the N.R.A., wrote in an email to Mr. Cooper. “Is Brewer a moron or a Manchurian candidate?”

Mr. Cooper replied by saying of Mr. Brewer: “He is kicking our side’s ass because no one on our side will leak AckMc’s info.”

The unraveling of lawyers, guns and money coincides with the departures of half a dozen board members in recent weeks. But Mr. LaPierre remains center stage, as polarizing as ever.

“Donald Trump and Wayne LaPierre are made for each other,” said Peter Ambler, executive director of Giffords, the gun control group started by former Representative Gabrielle Giffords. He called them “mirror images” engulfed in “allegations of corruption and mismanagement.”

But Todd Rathner, a member of the N.R.A.’s board, said, “Wayne is leading and proving that he has the political juice to get the job done.”