A small-town police department in Milton, West Virginia, is facing more scrutiny after another troubling video surfaced of a questionable arrest. The newly obtained video contradicts the sworn statement of a Milton police officer who said the man who was arrested resisted arrest and tried to escape. PAR investigates the case and delves deeper into the finances of the town, which has nearly doubled its collections of court fines and fees over the past decade.

Read the transcript of this video: https://therealnews.com/west-virginia…

There has been an explosion of incarceration in rural communities across America. PAR explores the profit motive that has stimulated this rapid increase in our carceral complex with guest Otto the Watchdog, a first amendment auditor.

By uncovering disturbing patterns that are as prevalent today as ever, philosopher Jacob Stanley reveals in How Fascism Works: The Politics of Us and Them that the stuff of politics—charged by rhetoric and myth—can quickly become policy and reality. Only by recognizing fascist politics, he argues, may we resist its most harmful effects and return to democratic ideals.

For this conversation Stanley is joined by Harvard associate professor of History Elizabeth Hinton.

37:36
look I’m white but it’s in my
self-interest to fight against racism
because it opens my society to fascism

Are economics responsible for fascism?

And for the record: If there’s one thing America is suffering from, it is not “under-incarceration.” We’re number one in the world in incarceration. The United States currently has over 2.1 million total prisoners. The prison population in 1972 was 200,000, almost 2 million less than it is today.

As you can see, we have about 1/5 of the population of China, yet have more people in jail than the world’s most-populous nation. And Tom Cotton probably found out that 1 in 4 adult male black Americans have been in jail, and thinks we can easily bump that to 2 or 3 out of 4 with just a little bit of creative thinking by police and the courts. What a deftly subtle dog whistle that nobody picked up on!

Oh, and he’s not too fond of women either: 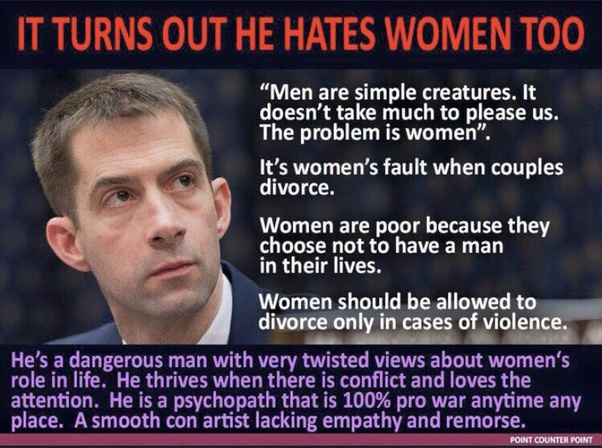 And just a reminder to that freak of nature Tom Cotton, we are the only country in the entire world that sentences juveniles to life without the possibility of parole.

Juvenile Life Without Parole: An Overview | The Sentencing Project
Twenty-five states and the District of Columbia have banned life sentences without the possibility of parole for juveniles; in a… Read More »
https://www.sentencingproject.org/publications/juvenile-life-without-parole/

Also, we were literally allowed to give juveniles the death penalty until Roper v Simmons was decided in 2005.

The Juvenile Death Penalty Prior to Roper v. Simmons
The death penalty for juvenile offenders was banned by the Supreme Court in 2005. This section includes excerpts from ” The Juvenile Death Penalty Today: Death Sentences and Executions for Juvenile Crimes January 1973 – February 28, 2005 ” by Professor Victor L. The report is a comprehensive review…
https://deathpenaltyinfo.org/policy-issues/juveniles/prior-to-roper-v-simmons

So carceral sociopath Cotton must have achieved his first erection in decades, practically lactating over the thought of incarcerating vulnerable people, knowing Black and Brown people are over represented. And this must cheer him up! 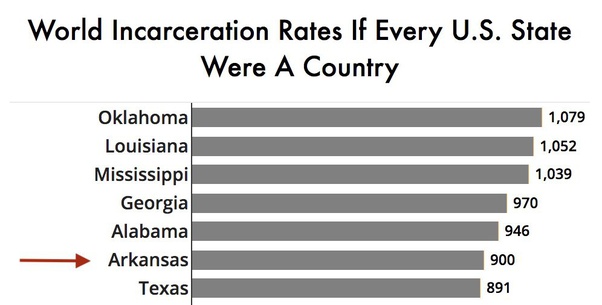 Tom Cotton dreams of inheriting the High-Priest of Diahrrea Gargling’s hate-cult, and riding their adulation to a throne crafted from the bones of his libtard foes, but you ain’t likable enough, your creepness. If Hillary wasn’t likable, you’re actively, off-puttingly, seriously-we’re-shipwrecked-in-the-uncanny-valley-level unlikable. Looking forward to watching you fail, though.

No amount of growth or good intentions will change this fact.

All five of these things are simultaneously true:

This issue exposed itself again Thursday during the presidential debate in Houston. Moderator Linsey Davis put a question to Biden:

You said that some 40 years ago. But as you stand here tonight, what responsibility do you think that Americans need to take to repair the legacy of slavery in our country?”

Biden could have taken responsibility for his comments and addressed the question directly, but he didn’t. Instead, he gave a rambling, nonsensical answer that included a reference to a record player. But, the response ended in yet another racial offense in which he seemed to suggest that black people lack the natural capacity to be good parents:

We bring social workers into homes and parents to help them deal with how to raise their children. It’s not that they don’t want to help. They don’t — they don’t know quite what to do. Play the radio, make sure the television — excuse me, make sure you have the record player on at night, the — the — make sure that kids hear words. A kid coming from a very poor school — a very poor background will hear four million words fewer spoken by the time they get there.

His language belies a particular mind-set, one of a liberal of a particular vintage. On the issue of race, it is paternalistic and it pities, it sees deficiency in much the same way that the conservative does, but it responds as savior rather than with savagery. Better the former than the latter, surely, but the sensibility underlying the two positions is shockingly similar. It underscores that liberalism does not perfectly align with racial egalitarianism, regardless of rhetoric to the contrary.

On Sunday, Biden made a speech on race in Birmingham commemorating the 1963 bombing at the 16th Street Baptist Church, in which he said on the issue of how racism and racial hatred affect black people:

“We know we’re not there yet. No one knows it better. My mom used to have an expression, ‘You want to understand me, walk in my shoes a mile.’ Those of us who are white try, but we can never fully, fully understand. No matter how hard we try. We’re almost, we’re almost at this next phase of progress in my view.”

Progress. That is the wall behind which white America hides, including white liberals. (Even many black leaders have absorbed and regurgitate the progress narrative.) It expects black people to swell and applaud at their effort. But, how is that a fair and legitimate expectation? Slavery, white supremacy and racism, are horrid, man-made constructs that should never have existed in the first place. Am I supposed to cheer the slow, creeping, centuries-long undoing of a thing that should never have been done?

Malcolm X was once asked if he felt that we were making progress in the country. He responded: “No. I will never say that progress is being made. If you stick a knife in my back nine inches and pull it out six inches, there’s no progress. If you pull it all the way out, that’s not progress. The progress is healing the wound that the blow made.”

I don’t even think that’s progress. That just returns the situation to a common baseline before the crime was committed.

Furthermore, it’s not what Biden says in prepared remarks that’s problematic, it’s what he says off the cuff and under pressure that to me reveal an antiquated view on racial matters and racial sensitivities.

It was the way he advocated for the 1994 crime bill, a bill that contributed to America’s surging mass incarceration, which disproportionately affected black and brown people in this country.

The bill did some good, but the harm it did cannot be overlooked or understated. Rather than fully owning up to to the disastrous aspects of the bill, Biden has over the years bragged about it and defended it.

It was in the way he described then-candidate Barack Obama in 2007 as an African-American who was “articulate and bright and clean.” Clean? As opposed to what?

This critique of Biden isn’t personal. I bear no ill will for the man. But, a fact is a fact, and no amount of growth, change or well-intentioned good-heartedness has the ability to erase it.

The fate of Khashoggi might come as a shock to many Americans, but it’s nothing new. A U.N. report reveals that over “3,000 allegations of torture were formally recorded” against Saudi Arabia between 2009 to 2015, according to The Guardian, with the report also noting a lack of a single prosecution of an official for the conduct.

I have been attempting to expose this for many years. Others in the U.S. government know it, but either won’t admit it or attempt to brush it aside. It’s a fact that the Kingdom of Saudi Arabia is the largest sponsor of radical Islam on the planet, and no other nation is even close.

.. Since the 1980s, over $100 billion has “been spent on exporting” Wahhabism (the brand of Islam that controls Saudi Arabia and is most prevalent in madrassas). According to Foreign Policy Magazine, an “estimated 10 to 15 percent of madrassas are affiliated with extremist religious or political groups,” while the number of madrassas in places like Pakistan and India has increased exponentially – from barely 200 to over 40,000 just in Pakistan.

Even the State Department noted during the Obama administration that Saudi Arabia was the “most significant source of funding to Sunni terrorist groups worldwide,” and said Qatar and Saudi Arabia were “providing clandestine financial and logistic support to ISIL and other radical Sunni groups.”

.. Of course, this isn’t new, as the previously classified 28 pages of the 9/11 Commission report can also tell you.

The Saudis have exported this radical ideology worldwide. They have also committed war crimes in their Yemen war – a war for which American taxpayers are being used as unwitting accomplices.

The Yemen war, fought with American weapons and logistical support, has killed tens of thousands and, according to The Washington Post, left 8 million more “on the brink of famine,” in what it calls “the world’s worst humanitarian crisis.”

.. There is ample evidence of mass incarceration, indefinite detention, torture, and a complete lack of the rule of law and due process within Saudi Arabia. As a matter of understatement, this is antithetical to American ideals.

.. When Truth asked the group of mostly white women in her audience whether she was a woman, she was not simply pointing to the hypocrisy of Western thought in which nations and “civilized” societies were built on the enslavement, murder and exploitation of women and children. Truth’s question was a provocation, a challenge to a racial structure built on the dehumanization of an entire group of human beings.

.. The barbarity of American slavery should be recalled more often, if only to truly understand the significance of its demise. It was

.. It was a system that normalized and codified its everyday brutality. It was life in constant fear and punishing, exacting labor. And it was completely legal.

.. Who successfully sued a white man to get back her son.

.. For example, Truth, in fact, had only five children, not 13 — an embellishment attributed to those who later transcribed the speech for the illiterate former slave.

.. I think of her standing in a courtroom to claim her child and I remind myself that this is what freedom means.

.. I participated in the Occupy movement, during which a crossracial coalition of people from New York to Honolulu protested income inequality, gentrification, police brutality and unjust incarceration. The movement had many successes, but in its immediate aftermath we saw widespread crackdowns in cities around the country on people’s ability to interact and exist in urban outdoor spaces — policies that have aided efforts to criminalize the nation’s homeless and pre-emptively arrest other vulnerable populations.

.. In order to have hope, I have to believe that, after the backlash, things — for black Americans and other oppressed people here and around the world — will change again.

.. For black Americans, the struggle of emancipation is riddled with its failures: sharecropping, lynching, segregation, disenfranchisement and brutal, unfair treatment by the criminal justice system.

.. John Lewis said in a recent tweet, “Do not get lost in a sea of despair.