Much focus is given to the male narcissist, and the destruction and abuse they cause. However, female narcissists can cause just as much destruction and can ruin your life. She may be your lover, co-worker, or boss, or even your mother. Just because the narcissist is a female does not make the abuse less, and does not mean she cannot destroy a man’s life. Emotional abuse can cause permanent physical damage to your brain, regardless if it is done by a male or female.

Note the links are paid links. I may get a small amount of money if you purchase anything, at no extra cost to you.

Washington (CNN) Two lawyers who went to court to claim voter fraud after the 2020 election must pay nearly $180,000 to the defendants they sued, a federal magistrate judge ordered Monday, saying their lawsuit aimed to “manipulate gullible members of the public and foment public unrest.”

The order from Magistrate Judge N. Reid Neureiter of the US District Court in Colorado adds to the federal judiciary’s condemnations of attempts by attorneys supporting then-President Donald Trump to use the courts to vet right-wing conspiracies in the days after the presidential election.
Attorneys Gary D. Fielder and Ernest John Walker will have to pay attorneys fees of $50,000 to Facebook (now Meta), about $63,000 to Dominion Voting Systems, about $63,000 to the non-profit Center for Tech and Civic Life, more than $6,000 to the state of Pennsylvania and nearly $5,000 to the state of Michigan.
“They need to take responsibility for their misconduct,” Neureiter wrote in his order, adding that the lawsuit defamed the defendants.
He continued: “I believe that rather than a legitimate use of the legal system to seek redress for redressable grievances, this lawsuit has been used to manipulate gullible members of the public and foment public unrest. To that extent, this lawsuit has been an abuse of the legal system and an interference with the machinery of government. For all these reasons, I feel that a significant sanctions award is merited.”
The lawsuit from late December 2020 was an attempt to create a class action challenge to the election on behalf of American voters, including eight named plaintiffs. Neureiter previously wrote a scathing 68-page opinion condemning the post-election lawsuit.
close dialog
The plaintiffs had no lawyers or experts that were able to support their claims of switched votes and government conspiracies, the judge noted, calling the lawsuit itself “one enormous conspiracy theory.”
Neureiter’s earlier ruling was the first major consequence in federal court to befall lawyers and litigants who pushed Trump’s attempt to undermine the 2020 election result in court. Other courts are still considering penalties for other lawyers involved in the failed pro-Trump lawsuits.
In August, a federal judge in Michigan sanctioned pro-Trump lawyers Sidney Powell and Lin Wood, as well as several other attorneys, ordering them to reimburse the attorneys’ fees that the city of Detroit and Michigan state officials paid in seeking the sanctions. The judge said the lawyers, who worked on Trump-aligned lawsuits seeking to challenge election results, had “engaged in litigation practices” that were “abusive and, in turn, sanctionable.”
Tweet

Chamberlain, you see, isn’t the only other non-boxer endowed with such incredible physical ability that a lot of people believed he could return to action deep into middle age. Jim Brown, who won eight NFL rushing titles in his nine seasons with the Cleveland Browns, had been retired for 17 years when he appeared on the cover of the Dec. 12, 1983, issue of Sports Illustrated, wearing a Los Angeles Raiders uniform. The headline read “Jim Brown: Are you serious? A comeback at 47? Hey! You’re just what the boring NFL needs!”

Arum, interestingly, had introduced Brown to Ali after Brown’s final NFL season, in 1965. Arum began promoting boxing matches in 1966, at which point Brown asked the new president of Top Rank if he could arrange a title bout between himself and Ali.

Ali met with Brown at Hyde Park in London, where the champ asked the 6-2, 230-pound football legend to try to hit him, as hard as he could. A perplexed Brown then fired a succession of roundhouse shots for about 30 seconds, all of which Ali easy evaded, while occasionally landing stinging, open-palm slaps.

“Ali kept slapping him in the face, not hard, but hard enough and often enough to make the point that as great an athlete as Jim was, he’d have no change in the ring against Ali,” Arum is quoted as saying in Hauser’s book.

Bottom line: Boxing is not like any other sport. Just as there are great boxers who would be utter failures at football, basketball and baseball, so, too are there great athletes in those sports who would fare better trying to pole-vault across the Grand Canyon than stepping inside the ropes against an elite fighter.

Jim Brown once decided to become a boxer and challenge Ali for his title. Lucky for Jim, he changed his mind. 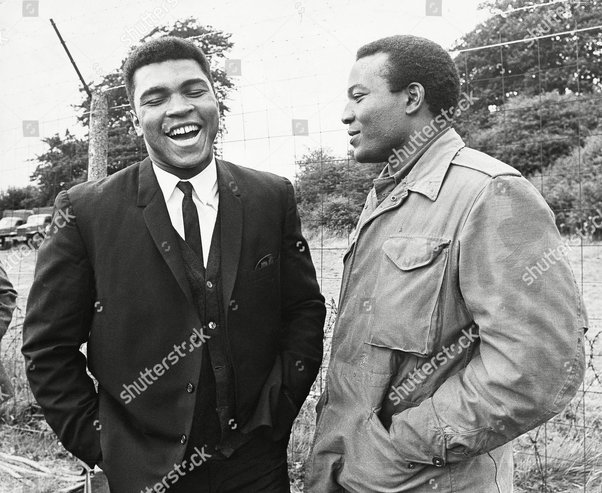 After the great Browns running Back retired in 1965, the 29 year old was restless for new adventures. Brown, a genuine athletic freak, decided boxing would be his new pastime. Brown, like Chamberlain would after him, also decided why start at the bottom? What not go straight to the top and take Ali’s title?

Chris Mannix told the story in Sports Illustrated in 2012, about how Jim Brown hatched the idea that he could prove his superiority as an athlete and make a boatload of money at the same time. So he approached Bob Arum, the boxing promoter Brown himself had introduced to Muhammad Ali. Brown was in the early stages of finding Hollywood stardom, but was enamored with the idea of dominating a second sport. Arum, who privately thought the idea was idiotic, but out of gratitude for Brown’s introducing Ali to him, decided he owed it to Brown to approach Ali with Brown’s wish to fight him and take over boxing:

““So I went to talk to Ali,” Arum told Mannix. “He says, ‘Jim wants to do what? Bring him here.’ So I took him to Hyde Park in London, where Ali used to run. Ali said, ‘Jimmy, here’s what we’re going to do: You hit me as hard as you can. So Brown starts swinging and swinging, and he can’t hit him. He’s swinging wildly and not even coming close. This goes on for, like, 30 seconds. Then Ali hits him with this quick one-two to his face. Jimmy just stops and says, ‘Okay, I get the point.’ ”.”

Jim Brown once wanted to fight Muhammad Ali, and it was a very dumb idea

Brown dropped his idea of becoming a boxer, but the humiliation he got in being slapped around so easily by Ali poisoned any friendship between the two men.

Of course later Brown would encourage Wilt Chamberlain to fight Ali – since Jim liked neither of them, and knew how it would go with a non-boxer challenging the greatest living heavyweight, he thought it was a win/win.

Brown would also deny in later years that he ever considered boxing – but there were just too many witnesses to what happened. Brown is known to be a bit of a prickly personality (that is a nice way to put it) and being humiliated did not sit well with a man who regarded himself so highly.

In a surprising turn from Tucker Carlson’s usual behavior, the Fox News host went at Trump’s neck on his internet show by saying it was “appalling” that Trump has yet to donate any money to his supporters that were arrested in connection with the January 6th Capitol Riots.