One is solidly Republican and will stay that way; the other leans Democratic. And then there are the in-betweeners.

At Nancy Pelosi’s news conference last week, a reporter asked her about Joe Biden’s comments on his congenial dealings in the senate of the 1970s with the Southern Democrats James O. Eastland and Herman Talmadge, who were both staunch opponents of Civil Rights legislation and racial integration:

There’s been a back‑and‑forth between Vice President Biden and some of the candidates. Do you think that it is helpful to the party to sort of fight that fight over who best represents the party when it comes to sensitivities about race?

Reporters continued to press Pelosi: “What do you think about Vice President Biden’s words, referencing his work with segregationists and talking about his idea of civility?”

She shot back: “I have answered that question, and that’s all I’m going to say.”

The intensity of the exchange shows how determined key Democratic leaders are to keep the party focused on the bread-and-butter issues of jobs, health care and financial stability and to shore up the gains the party made in 2018, especially among whites.

Pelosi’s response illustrates the deep fear among the same leaders that the agenda could shift to issues of race and immigration. These are issues that a cadre of newly elected progressive members of Congress including Alexandria Ocasio-Cortez, Ilhan Omar, Rashida Tlaib and Ayanna Pressley — as well as Democratic presidential candidates like Elizabeth Warren, Kamala Harris and Cory Booker, all with warmly enthusiastic followings — have brought to the fore. Race and immigration are just the issues Donald Trump and his Republican allies want to place front and center in 2020.

Underlying this is the recognition by many Democratic strategists of the continuing political centrality of less highly educated white voters. Marginal shifts in partisan balloting by the white working class have been a crucial determinant in the outcome of elections since 1968.

This non-college white constituency — pollster shorthand for both the white working class and the white middle class without college degrees — makes up a massive bloc of the electorate, with estimates ranging from 48 percent of the entire electorate in 2016, according to an analysis by Catalist, a liberal voter research group, to 54 percent, according to the Cooperative Congressional Election Study.

Pete Brodnitz, founder and president of Expedition Strategies, a Democratic polling firm that has performed studies for the Democratic House Majority PAC, wrote by email that in 2018 he found that the white working class could be divided into five political categories:

How each of these categories voted in 2016 shows the importance of these distinctions. In a poll of battleground House Districts, Hillary Clinton carried the reliably Democratic base by a solid 67-point margin (78-11) and the lean Democrats by 61 points (64-3). She lost the true independents by 16 percentage points (21-37). Trump won overwhelmingly among the lean Republican whites (73-12, a 61-point margin) and the solid Republicans by 84 points (88-4), according to the data collected by Expedition Strategies working with Normington/Petts, another Democratic polling firm.

What this data shows is that Democrats should have little trouble retaining the support of members of the white working class who identify as Democrats, but they will struggle mightily to win over their Republican counterparts.

This divide leaves the small percentage of the white working class whose views put them in the middle ground between left and right up for grabs and likely to determine the outcome in 2020.

The AFL-CIO survey suggests that the roughly 10 percent of non-college whites who do not identify with either party may be reachable for Democratic candidates, but there are big hurdles.

For one thing, these self-described independents do not side with mainstream Democrats on the kinds of incendiary issues that President Trump loves to promote.

The survey asked, for example, whether voters agree or disagree with the statement “Social and economic problems in this country are largely due to individuals across races and origins refusing to work and expecting handouts.”

All Democrats, including white non-college Democratic respondents, took liberal stands, sharply disagreeing with the statement by 62 points (78-16) and 56 points (76-20). Independent voters in the white working class were in favor by 11 percentage points (52-41), and Republican respondents were solidly in agreement, by 72 points (84-12). 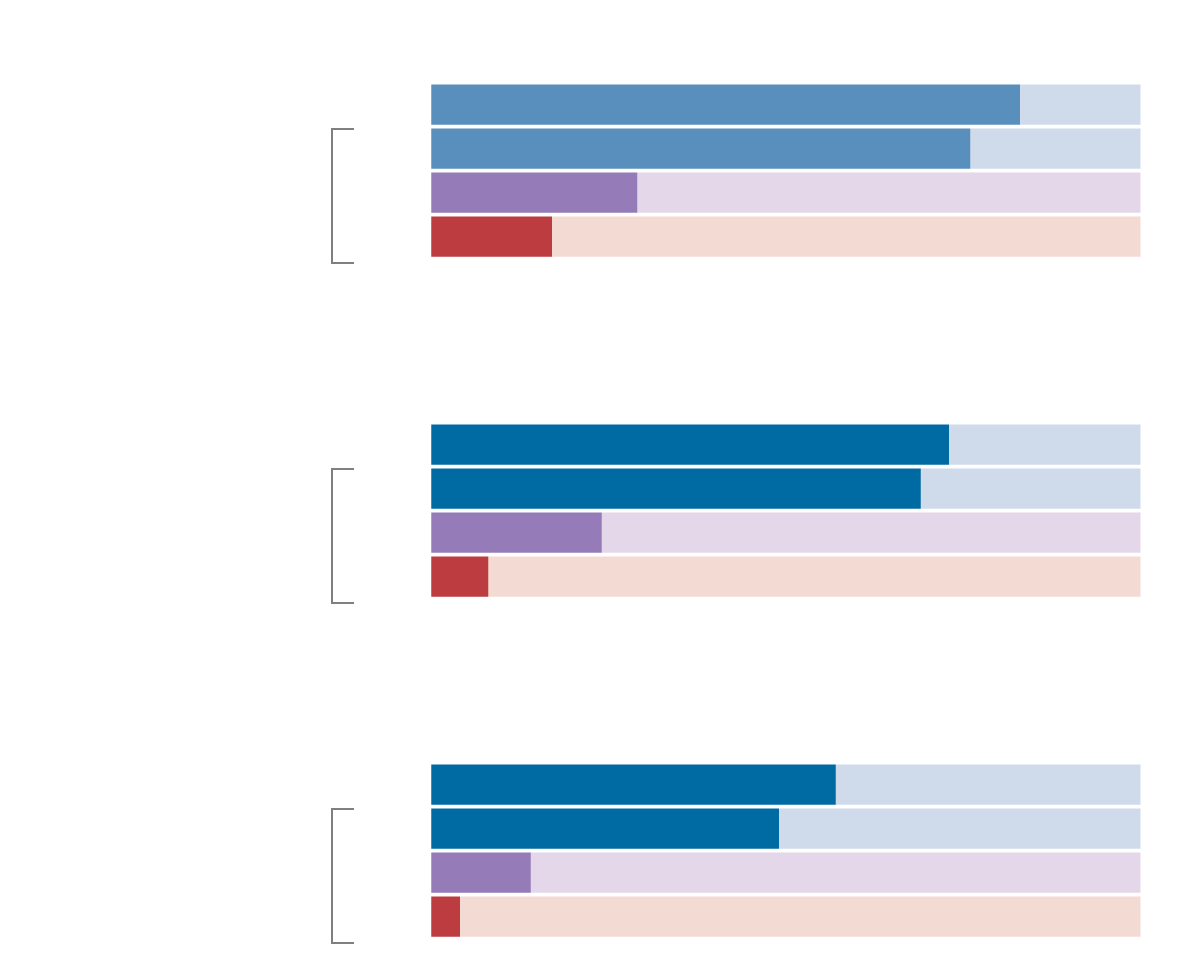 AGREE: White people in the U.S. have certain advantages because of the color of their skin.

AGREE: Generations of slavery and discrimination have created conditions that make it difficult for African-Americans to work their way out of the lower class.

DISAGREE: Ethnic groups like the Irish, Italian, Jewish and many other minorities overcame prejudice and worked their way up. Blacks should do the same without any special favors.

The next accompanying graphic illustrates hostility toward immigrants — or acceptance.

DISAGREE: Increase border security by building a fence along part of the U.S. border with Mexico.

The AFL-CIO survey demonstrate why liberal Democratic leaders like Pelosi are resolved to stand clear of some of the issues that divide their party from independents. At the same time, it shows why Pelosi and others want to focus on so-called kitchen table issues.

On health care and economic matters, there is far more overlap between the views of Democrats as a whole and independent white working class voters.

Support for a tax on wealth in excess of $100 million tops 90 percent among Democrats, while white working class independents support such a proposal 59-25.

A proposal supported by Democrats of all stripes — “Having the government produce generic versions of lifesaving drugs, even if it required revoking patents held by pharmaceutical companies” — has the backing of non-college white independents, 56-25.

Two proposals backed by some of the Democratic presidential candidates — Abolish ICE and Medicare for All — do not sell well among white non-college independents, who opposed the two initiatives by 71-15 and 48-31.

Podhorzer argues that in the 2020 battleground districts and states the contest will be fought over the 13 percent who are swing voters, a group he calls “partisan bystanders.” He described them as “voters who either have a very negative view of both parties or do not have strong feelings about either party. These voters favored Democrats in the 2018 midterms by 11 points after favoring Trump by 6 points in 2016.”

According to Podhorzer, almost half (46 percent) of the partisan bystanders are “white non-college, so this group, especially white non-college women, is going to be a battleground for both campaigns.”

Podhorzer makes a key point: In his view, this 13 percent is receptive to Democratic appeals because they

are looking for answers to the basic economic challenges they face. That issues like health care are much more important to them makes sense given that just about everyone who cares about issues like immigration has already picked sides and won’t be moved.”

In some respects, the AFL-CIO poll provides ammunition to the Third Way, a centrist Democratic advocacy group.

Jonathan Cowan, president and co-founder of Third Way, argued in an email that:

Going forward to 2020, there are lines that Democrats can’t cross if they want to win nationally and hold the House and gain in the Senate. Medicare for All is one of those lines. But there are others like abolishing ICE, a guaranteed federal job, and certain climate proposals that ignore the economic circumstances of the interior of the country.

A Third Way survey of Democratic primary voters, conducted in May by David Binder Research, found that calls to abolish ICE in particular are problematic. In fact, Democratic presidential candidates are backing away from their earlier support of the idea, despite the horror show that is happening on the border right now.

In the case of health care, the Third Way survey of Democratic primary voters found that a plurality, 42.9 percent, preferred a candidate “who wants an annual cap that limits the costs people pay while making sure everyone has insurance coverage” while 35.2 percent prefer a candidate “who wants to pass a single-payer, Medicare for All government-run plan.”

Both Democratic and Republican strategists are putting all of these findings under a microscope because in a highly competitive election, seemingly small shifts can determine the outcome.

Take the difference between Hillary Clinton’s performance in 2016 and the performance of House Democratic candidates.

In 2016, all non-college whites went 60-34 for Trump over Clinton, while voting 58-38 in favor of Republican House candidates, according to Brian Schaffner, a political scientist at Tufts and senior researcher at the Cooperative Congressional Election Study.

This may seem insignificant, but if Clinton had been able to match the margin of Democratic House candidates, not only would she have picked up 2.9 million votes nationwide, she would have won Michigan, Pennsylvania and Wisconsin by a combined total of 383,000 votes instead of losing them by a total of 79,646 votes.

One interpretation of Democratic success in taking control of the House in 2018 suggests a strategy of moderation, while using animosity to Trump to boost turnout in hard core Democratic constituencies, including among minorities, young voters and single women. If the 2018 House give hints on the type of voters who offer the best targets for 2020, it is worth recalling that more than three quarters of the newly Democratic seats are in centrist districts.

However, the demographics of these districts mask the significant gains Democrats made in 2018 among non-college, less affluent whites. This becomes clear in an analysis of the 2018 election by Yair Ghitza, chief scientist at Catalist.

“There has been a lot of attention paid to the Democratic victories in suburban areas, but we find that Democratic gains were actually largest in rural areas,” Ghitza wrote:

These gains weren’t enough to get over 50 percent and win seats in many rural districts, so they have escaped much of the mainstream election analysis to this point. These changes are nonetheless important, particularly because they were large in many of the Midwest battleground states that will no doubt be important in 2020.

Ghitza provided further support for the Democratic strategy of going after white non-college voters by noting that 2018 Democratic gains were “largely driven by voters who voted for Trump in 2016 and voted Democratic in 2018.”

It is no wonder, then, that Pelosi is not the only party leader warning Democrats to be wary of the danger of focusing too much on social and cultural issues in the heat of the primaries. Such counsel also comes from African-American Democrats.

Richmond was joined by Representative John Lewis, who said he didn’t think Biden’s remarks were “offensive,” before adding, “During the height of the civil rights movement we worked with people and got to know people that were members of the Klan — people who opposed us, even people who beat us, and arrested us and jailed us.”

The Rev. J.M. Flemming, president of the Greenville NAACP, told the Washington Post:

“I’m not going to let anybody sidetrack folks that I know about who are looking at Biden, when we ought to be looking at the things said by Trump. Nobody is making anybody out to be a perfect person, but what Trump is doing, for me, that’s far worse.”

The concerns of African-Americans, in this view, are substantially the same as the concerns of the millions of white working class voters who remain open to Democratic candidates — or at least they coincide in critically important ways.

The fate of the Democratic Party in 2020 hangs on this premise and on a united resistance to Trump’s malign strategy of divide and conquer.