They sold their principles a long time ago.

Before going to the White House, Donald Trump demanded that the Fed raise interest rates despite high unemployment and low inflation. Now he’s demanding rate cuts, even though the unemployment rate is much lower and inflation at least a bit higher. To be fair, there is a real economic argument for rate cuts as insurance against a possible slowdown. But it’s clear that Trump’s motives are and always have been purely political: he wanted the Fed to hurt President Obama, and now he wants it to boost his own reelection chances.

It’s not surprising, then, that Trump is also trying to stuff the Federal Reserve Board with political allies. What may seem surprising is that many of his would-be appointees, like Stephen Moore and now Judy Shelton, have long records of supporting the gold standard or something like it. This should put them at odds with his efforts to politicize the Fed. After all, one of the supposed points of a gold standard is to remove any hint of politics from monetary policy. And with gold prices rising lately, gold standard advocates should be calling for the Fed to raise rates, not lower them.

But of course both Moore and Shelton have endorsed Trump’s demand for rate cuts. This creates a dual puzzle: Why does Trump want these people, and why are they so willing to cater to his wishes?

Well, I think there’s a simple answer to both sides of the puzzle, which involves the reason some economic commentators (not sure if they deserve to be called “economists”) become goldbugs in the first place. What I’d suggest is that it usually has less to do with conviction than with cynical careerism. And this in turn means that goldbugs are, in general, the kind of people who can be counted on to do Trump’s bidding, never mind what they may have said in the past.

Let me start with what might seem like a trivial question, but which is, I believe, crucial: What does it take to build a successful career as a mainstream economist?

The truth is that it’s not at all easy. Parroting orthodox views definitely won’t do it; you have to be technically proficient, and to have a really good career you must be seen as making important new contributions — innovative ways to think about economic issues and/or innovative ways to bring data to bear on those issues. And the truth is that not many people can pull this off: it requires a combination of deep knowledge of previous research and the ability to think differently. You have to both understand the box and be able to think outside it.

I don’t want to romanticize the mainstream economics profession, which suffers from multiple sins. Male economists like me are only beginning to comprehend the depths of the profession’s sexism. There’s far too much dominance by an old-boy network of economists with PhDs from a handful of elite institutions. (And yes, I’ve been a beneficiary of these sins.) Many good ideas have been effectively blocked by ideology — even now, for example, it’s hard to publish anything with a Keynesian flavor in top journals. And there’s still an overvaluation of mathematical razzle-dazzle relative to real insight.

But even for people who can check off all the right identity boxes, climbing the ladder of success in mainstream economics is tough. And here’s the thing: for those who can’t or won’t make that climb, there are other ladders. Heterodoxy can itself be a careerist move, as long as it’s an approved, orthodox sort of heterodoxy.

Everyone loves the idea of brave, independent thinkers whose brilliant insights are rejected by a hidebound establishment, only to be vindicated in the end. And such people do exist, in economics as in other fields. Someone like Hyman Minsky, with his theory of financial instability, was, in fact, ignored by almost everyone in the mainstream until the 2008 crisis sent everyone scurrying off to read his work.

Which brings me to the gold standard.

There is overwhelming consensus among professional economists that a return to the gold standard would be a bad idea. That’s not supposition: Chicago’s Booth School, which surveys a broad bipartisan group of economists on various topics, found literally zero support for the gold standard.

The events of the past dozen years have only reinforced that consensus. After all, the price of gold soared from 2007 to 2011; if gold-standard ideology had any truth to it, that would have been a harbinger of runaway inflation, and the Fed should have been raising interest rates to keep the dollar’s gold value constant. In fact, inflation never materialized, and an interest rate hike in the face of surging unemployment would have been a disaster.

Thank God we weren’t on the gold standardCreditFederal Reserve of St. Louis 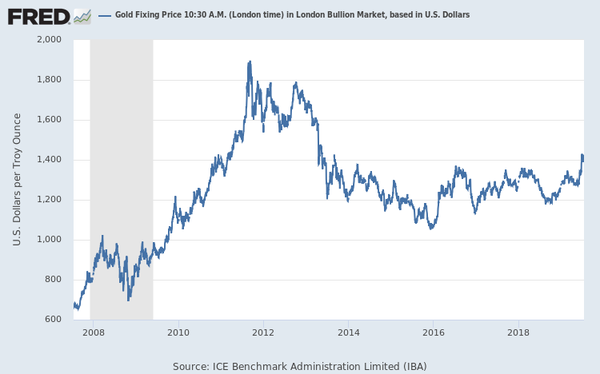 Why, then, does goldbuggery persist? Well, some billionaires — such as Robert Mercer, also a big Trump supporter — have a thing about gold. I’m not entirely sure why, although I suspect that it’s just a plutocratic version of the Fox News syndrome — the angry old white guy ranting about big-government types inflating away his hard-earned wealth to give it away to Those People. And these billionaires give a lot of money to libertarianish think tanks that peddle gold standard derp.

Now imagine yourself as a conservative who writes about economics, but who doesn’t have the technical proficiency and originality needed to get a good job in academia, an economic policy institution like the Fed, or a serious think tank. Well, becoming a vocal gold-standard advocate opens a whole different set of doors. You’ll have a much fancier and more lucrative career, get invited to a lot more stuff, than you would if you stayed with the professional consensus.

What I’m suggesting, in other words, is that gold-standard advocacy is a lot like climate change denial: There are big personal and financial rewards for an “expert” willing to say what a few billionaires want to hear, precisely because no serious expert agrees. In the climate arena, we know that essentially all climate deniers are on the fossil-fuel take. There may be some true believers in the monetary magic of gold, but it’s hard to tell; what we do know is that prominent goldbugs do very well relative to where their careers would be if they didn’t buy into this particular area of derp.

And that, in turn, brings us back to Trump.

Why would Trump expect goldbugs to abandon their principles and back his demands to fire up the printing presses? Why is he, in fact, apparently finding it easy to get goldbugs willing to turn their backs on everything they claimed to believe?

The answer, I’d submit, is that it was never about principles in the first place. Many, perhaps most prominent goldbugs advocate a gold standard not out of conviction but out of ambition; they sold their principles a long time ago. So selling those pretend principles yet again in order to get a nice Trump-sponsored job is no big deal.

It’s cynicism and careerism all the way down.