Someone posted a fake press-release to a news-wire.  Note: it was not on Walmart’s website.

It doesn’t really matter what is or isn’t proven. China will continue to label it fake news either way. Everyone does that, anyway. Whataboutism, too. Very neat. Very handy. You can prove whatever you want. Debunk whatever you want. And China would just deflect. It’s kind of like dealing with a baby — you cannot scold a baby, the baby would just cry. All you can do to prevent the baby from doing what you do not want him to do? Distract him. 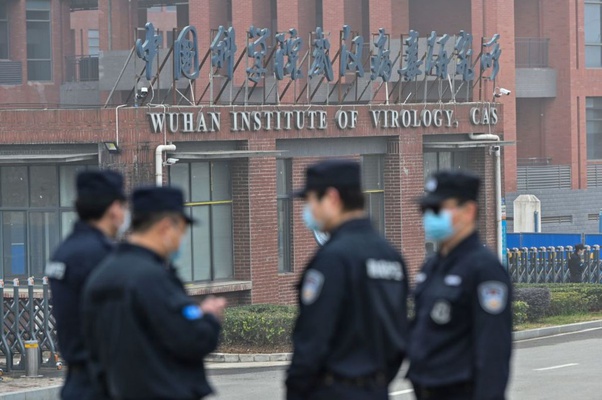 China can always bring up the Iraq war. Vietnam. Racism in America. Bring up anything really. Don’t admit to any wrongdoing. Ever. Maybe a small, tiny little concession here and there, but nothing major. The West is just jealous and trying to “keep the mighty Chinese dragon down”. They’re insecure! They cannot handle the great and glorious success of red China.

And hey, didn’t the British bring opium to China? Didn’t the West humiliate and weaken China for a long time? Even if you could prove China unleashed some virus on purpose to weaken the West, or was at best quite careless in containing it, you’ll see Chinese hypernationalists, marinated in seven decades of indoctrination, make actual excuses for it. Justifying it. Like how they justify everything the CCP does anyway.

They’ll make some video of people in Wuhan singing some catchy song. Like how they hired some supposed Uyghurs to praise the Chinese state in obviously scripted messages before… and, move on. Fully expecting the world to move on soon after.

Good luck.. Multiply this by hundreds or thousands of similar clients. Option trading is worse because the leverage is greater.

We’re not. Plain and simple. Anyone who frequents WSB knows this.

1) don’t do their due diligence, or

2) are okay with getting their strings pulled to be used as tools by the wealthy to manipulate masses.

If there was any doubt of these hedge fund’s influence and manipulate, this whole “WSB going silver” just put that conspiracy theory to rest and only does more to confirm that the game has always been rigged against the average person.

Edit: You know what would be AMAZING?? This was an idea already thrown out there, but if the mods could use twitter (and by pinning a statement on this subreddit) to invalidate the silver BS… That would be SUCH a great fucking move. Maybe a message like “There is no sentiment among WSB members to buy SLV stock and the little that exists is under scrutiny of WSB members”. That would just slam the door on any sources propagating that false information and call them out on their BS (because it’s just so obviously untrue). It would also make it clear for those checking the credibility of this fake news that the silver hype is a fabrication by variables outside of WSB and inform them of how convenient it is for hedge funds if people pulled from GME, and supported a stock they own massive shares of.

This goes without saying that I’m holding GME till the very end. Given how the media and some brokerages have gotten involved (and in a not so subtle way that benefits the hedge funds), it’s not even about the money anymore. And that’s coming from someone with student loans who stands to profit by exiting right now. Money comes and goes, but getting to witness firsthand just how rigged the system is and knowing who’s involved in keeping people in line is just something you can’t put a price tag on.

Dorsey’s message came at the end of May, after Twitter fact-checked tweets by President Donald Trump about mail-in voting, leading Trump to sign an executive order attacking Section 230 protections. Section 230 of the Communications Decency Act protects platforms from civil liability for the content on them and has enabled companies such as Facebook and Twitter to thrive.

A decentralized approach to fact-checking is likely to be popular in the blockchain community, which has long championed ideas like the “verified web.”

“It shouldn’t be tech companies per se getting into fact checking,” Balaji Srinivasan, an angel investor, entrepreneur and former CTO of Coinbase,  tweeted. “It should be open source technology. Free, universally available code and data for epistemology. Take a piece of text, parse it, extract assertions, compare to explicitly specified knowledge graphs and oracles.”

“Agree this should be open source and thus verifiable by everyone,” Dorsey replied.

Facts are a flashpoint on the political stage right now, and given Dorsey’s quasi-endorsement of a tech “solutionism” approach to fact-checking, it begs the question: What would such a system look like?

Thousands of people commented on Srinivasan’s and Dorsey’s tweets, referring to projects they thought might serve as future models.

One project is called Newsblocks, based in Glasgow, Scotland, and was conceived as a way to organize data for Newslines, a sister project. Newslines creates interactive news timelines about any topic. Think of it as a kind of “Wikipedia for news.”

Here is an example for Conor McGregor, which has almost 2,000 events in it.

Mark Devlin is the CEO of Newsblocks and has been in publishing for years. He founded Metropolis, one of Japan’s top English-language magazines and Japan Today, a popular Japanese news site in English. His claim to fame: He was the first person anywhere to place reader comments directly under news stories.

Devlin realized the news he was collecting was actually data. For example, an article about Yoko Ono holding an art exhibition today will likely mention that she was married to John Lennon, who was murdered in 1980. That’s three pieces of data that can be extracted from the article and then used in different ways.

“Once news is data then the data can be used to make all kinds of new products. You can sort the data to create timelines and newsfeeds,” said Devlin. “You can compare the meta data, like the data’s sources and other factors to enable verification and fake news detection, and you can compare data with other data to do automated fact-checking by comparing pieces of data.”

As an open platform everyone can use the same data, companies can create news verification systems, such as credit agencies for news, and could be used by social media companies, like Twitter.

The idea of news-as-data led Devlin to blockchain technology, which can collect, verify, store, price, and distribute such data, in something like a news data marketplace.

Ideamarket, a Los Angeles-based startup, aims to provide more objective rankings of information or ideas and move beyond traditional gatekeepers like media companies. It launched its prototype in November of 2019, and is built on Ethereum.

Ideamarket functions somewhat similarly to Reddit, in which people can upvote various media brands, including independent journalists. But instead of having no cost, upvotes cost money and increase in cost as vote count increases, meaning that people have to put their money where their mouth, or itchy retweeting trigger finger, is.

“It makes credibility expensive, said Elias. “For media corporations it makes it equally expensive for everybody in the same way that bitcoin makes money equally as expensive for central banks as it is for you and me. It creates true competition for credibility and incentivizes the public to do due diligence and seek undervalued ideas.”

In addition to investing in and earning interest on the sources they trust, users could also sell the ones they don’t, and earn money off that as well. Elias likened it to a stock market, but for ideas.

Elias’ plan is to launch a browser extension that would include the ranking of the news source next to articles from it on social media.

So, for example, depending on how the market shakes out, CNN might sit at 10th and Brietbart at 90th. Anyone can see how much trust a publisher has earned. Such a system could rank news sources on a platform like Twitter, without a single company having control over them and having to be the dreaded “arbiter of truth”.

“Rather than say this is true or false, which doesn’t really respect the readers free will and ability to make different judgments, we’re saying the market has put this at this rank,” said Elias. “And you can interpret a low ranking as fake news or an opportunity, because it’s undervalued.”

All of these models are at the early-early stage. Ideamarket is in the middle of raising its first round of angel investment, and Devlin has been unable to find funding for Newsblocks despite seeing significant interest in it, which he finds disheartening.

Another obstacle may also be the frustration of people trying to create platforms for facts in the current political environment. I reached out to Andrew Lippman, associate director of the MIT Media Lab and the senior research scientist on a project called Defacto, for this article. Defacto is a decentralized crowdsourced news verification system.

He said he wished he could help but the dilemma he faces is that Defacto is preaching to the converted. This is not a new problem, said Lippman, but is intensified by the low friction and high speed of current platforms.

“We can develop all the mechanisms in the world to check facts and propagate results, but the only people who pay heed to that are those who are open to questioning what they hear,” said Lippman. “

As Jonathan Swift said 300 years ago, “Falsehood flies, and truth comes limping after it, so that when men come to be undeceived, it is too late; the jest is over, and the tale hath had its effect.”