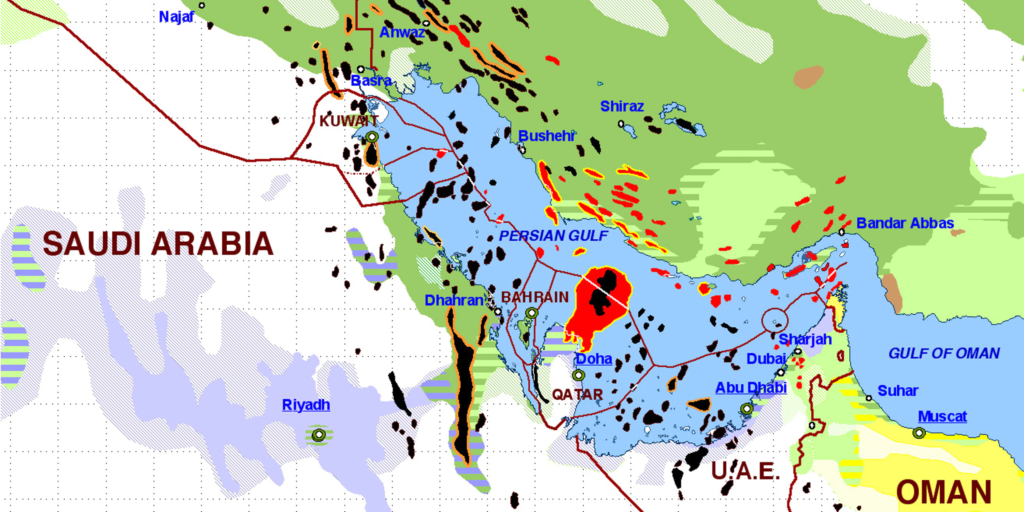 What the map shows is that, due to a peculiar correlation of religious history and anaerobic decomposition of plankton, almost all the Persian Gulf’s fossil fuels are located underneath Shiites. This is true even in Sunni Saudi Arabia, where the major oil fields are in the Eastern Province, which has a majority Shiite population.

As a result, one of the Saudi royal family’s deepest fears is that one day Saudi Shiites will secede, with their oil, and ally with Shiite Iran.

.. Similar calculations were behind George H.W. Bush’s decision to stand by while Saddam Hussein used chemical weapons in 1991 to put down an insurrection by Iraqi Shiites at the end of the Gulf War. As New York Timescolumnist Thomas Friedman explained at the time, Saddam had “held Iraq together, much to the satisfaction of the American allies Turkey and Saudi Arabia.”

Rob West, founder of Thunder Said Energy – an energy consulting firm, understands that the total decarbonization of the energy industry will be fueled by political attitudes around the world over the next few decades. However, West argues that proponents of ESG investing fail to understand that this transition will involve massive investment in fossil fuels and cooperation with villainized oil majors. He explains his framework for total decarbonization of the energy industry by 2050, and highlights the new technologies and investment vehicles that will be necessary to drive the transition. Filmed on October 18, 2019 in New York.

The United States is predicted to become a net energy exporter by 2020. This will be the first time since 1953 that the country exports more fossil fuels than it imports. For almost a century prior, the United States of America was the largest oil producer in the world. So how did the United States get hooked on foreign oil.

Every American president since Richard Nixon has pledged energy independence as a way to strengthen us geopolitically, make us more secure, or boost our economy.

The story of American oil begins in 1859 in Titusville, Pennsylvania. Small amounts of oil had seeped from the ground for a long time, but no one knew how to extract it. Until, Edwin Laurentin Drake, a former conductor, was hired. After many failed attempts, he finally struck gold — black gold.

Henry Ford’s Model T invention in 1908 – the first mass-produced car – made America the most motorized country in the world. Other industrialized countries like France, Britain and Germany were ways behind.

After water, concrete is the most widely used substance on the planet. But its benefits mask enormous dangers to the planet, to human health – and to culture itself

Taking in all stages of production, concrete is said to be responsible for 4-8% of the world’s CO2. Among materials, only coal, oil and gas are a greater source of greenhouse gases. Half of concrete’s CO2 emissions are created during the manufacture of clinker, the most-energy intensive part of the cement-making process.

But other environmental impacts are far less well understood. Concrete is a thirsty behemoth, sucking up almost a 10th of the world’s industrial water use. This often strains supplies for drinking and irrigation, because 75% of this consumption is in drought and water-stressed regions. In cities, concrete also adds to the heat-island effect by absorbing the warmth of the sun and trapping gases from car exhausts and air-conditioner units – though it is, at least, better than darker asphalt.

It also worsens the problem of silicosis and other respiratory diseases. The dust from wind-blown stocks and mixers contributes as much as 10% of the coarse particulate matter that chokes Delhi, where researchers found in 2015that the air pollution index at all of the 19 biggest construction sites exceeded safe levels by at least three times. Limestone quarries and cement factories are also often pollution sources, along with the trucks that ferry materials between them and building sites. At this scale, even the acquisition of sand can be catastrophic – destroying so many of the world’s beaches and river courses that this form of mining is now increasingly run by organised crime gangs and associated with murderous violence.

Concrete can take our civilisation upwards, up to 163 storeys high in the case of the Burj Khalifa skyscraper in Dubai, creating living space out of the air. But it also pushes the human footprint outwards, sprawling across fertile topsoil and choking habitats. The biodiversity crisis – which many scientists believe to be as much of a threat as climate chaos – is driven primarily by the conversion of wilderness to agriculture, industrial estates and residential blocks.

.. But that was lightweight compared to what is now happening in China, the concrete superpower of the 21st century and the greatest illustration of how the material transforms a culture (a civilisation intertwined with nature) into an economy (a production unit obsessed by GDP statistics). Beijing’s extraordinarily rapid rise from developing nation to superpower-in-waiting has required mountains of cement, beaches of sand and lakes of water. The speed at which these materials are being mixed is perhaps the most astonishing statistic of the modern age: since 2003, China has poured more cement every three years than the US managed in the entire 20th century.

Today, China uses almost half the world’s concrete. The property sector – roads, bridges, railways, urban development and other cement-and-steel projects – accounted for a third of its economy’s expansion in 2017. Every major city has a floor-sized scale model of urban development plans that has to be constantly updated as small white plastic models are turned into mega-malls, housing complexes and concrete towers.

Empty, crumbling structures are not just an eyesore, but a drain on the economy and a waste of productive land. Ever greater construction requires ever more cement and steel factories, discharging ever more pollution and carbon dioxide. As the Chinese landscape architect Yu Kongjian has pointed out, it also suffocates the ecosystems – fertile soil, self-cleansing streams, storm-resisting mangrove swamps, flood-preventing forests – on which human beings ultimately depend. It is a threat to what he calls “eco-security”.

A tough new Dick Cheney biopic is triggering some conservatives. Have they learned nothing?

So instead, I am summoned to a more urgent, if distasteful, task: to try and explain why anyone in the conservative movement (or anywhere else) would want to normalize Dick Cheney—let alone flat-out cheer for him. After all, this was a man who left office with an approval rating as low as 13 percent.

.. That’s lower than Richard Nixon when he resigned, lower than Jimmy Carter when he was replaced by Ronald Reagan. It’s as low as Herbert Hoover during the Great Depression and as low as Barack Obama among Republicans and conservatives.

Even today, Hillary Clinton and Donald Trump both have triple the approval ratings that Cheney left office with.

.. To plagiarize what Andrew Sullivan famously said about Hillary, anyone with Cheney’s destructive track record towards his own movement should have been drummed out “under a welter of derision.”

.. We don’t have to be “ordered” to remember and revere historical figures like Reagan, MLK, and JFK, or be shamed into doing so. But who the heck did Dick Cheney ever benefit outside of the corporate-crony one percent?

It was my respected colleague Kelley Vlahos who solved the mystery of why some members of the Beltway press just can’t quit Cheney: “because they still won’t admit that the war was wrong.” Bingo. Expecting the U.S. to export insta-democracy to decidedly non-Western cultures? Putting overwhelmingly Christian and Jewish “viceroys” in charge of historically Muslim nations? Gee, what could possibly go wrong…

.. As chilling and thrilling as Christian Bale is as Dick Cheney, perhaps no scene in Vice is as squirmy as Richard Dreyfus’s impersonation of Cheney in Oliver Stone’s W., when he stands in front of a CGI map in the War Room and smirkingly announces, “There is no exit strategy. We STAY!” (If that scene didn’t actually take place, it might just as well have.)

.. Still, there are scenes in Vice that come close. For a biopic about a man who defined the adage “personnel is policy,” it’s fitting that director Adam McKay, who has a strong comedy background, chose actors who are known for being funny just as much as for their work in dramas. Those include Sam Rockwell as George W., Tyler Perry as Colin Powell, and Steve Carell as Donald Rumsfeld. (Reuniting Bale and Carell also indicates that McKay rightly sees Vice as an unofficial prequel to his financial meltdown dark farce The Big Short.) Like the aforementioned W., McKay’s Vice is a sometimes frenetic, sometimes eerily calm black comedy satire. And like Josh Brolin in W., Sam Rockwell plays George Jr. as an easily played and comical doofus. There’s no doubt in this film as to who the real president was from December 2000 to the end of 2008

.. Watching Bale as a terse, leering, manipulative young reactionary as he grindstones and plays people against each other from the late ‘60s to his Bush-Cheney heyday, one is struck by his shameless entitlement. Cheney uses movement conservatism and old boy connections as his own Uber. If Christian Bale is a slim and athletic man trapped in a fat and ugly body, Cheney sees himself as the Richelieu or Machiavelli of his own real-life movie, trapped just one step behind the real decision-makers—until he finally gets that chance to ride his horse from Aqueduct to Santa Anita.

.. The other key role among these garbage men is Amy Adams’ take-no-prisoners performance as Lynne Cheney. Mrs. Cheney had the straight-A brains and Ph.D.-level drive to be a powerful judge or executive in her own right, and was, according to Adams, a better “natural politician” than her husband. But as a card-carrying member of the Phyllis Schlafly/Anita Bryant/Beverly LaHaye-era Right from rural Wyoming, Lynne had less than zero plans to transform herself into another bra-burning icon. Instead, “she lived her [considerable] ambitions through her husband,” as Adams said. Adams even added that compared to the iron-fisted Lynne, her husband Dick might have been the “velvet glove”!

.. And as these Cheney-rehabilitating articles prove, Lynne wasn’t the only one who got off on Dick’s raw exercise of power and privilege. Watching Dick Cheney at work must have been intoxicating for a Dwight Schrute or Montgomery Burns in his small pond, for someone who coveted the kind of vulgar bullying power that Cheney wielded. It was no accident that Stephen Bannon famously and semi-humorously put Dick Cheney in his own hall of heroes, behind only Darth Vader and Satan, citing Cheney’s peerless talent at “disrupting” established orders.

.. And if you’re a Never Trumper, just recall that a key reason Trump and Ted Cruz were the last Republicans standing in 2016 was because Cheneyism had so discredited the old “conservative” establishment.
.. Sorry, I’m just not there for conservative writers infantilizing Cheney and going all triggered snowflake at what big meanies the Hollywood libr’als are being to him. Christian Bale said it himself: “[Cheney’s] a big boy…he says himself he has no remorse, no regrets, he’d do everything again in a minute.” Exactly.

U.S. officials are skeptical of the Chinese offer for several reasons, said people involved with the talks. They argue that Chinese energy purchases would largely divert U.S. sales to other nations and have no overall impact on the U.S. trade deficit. They also aren’t sure that the U.S. could ramp up agriculture production that quickly.

.. China’s offer would benefit the Farm Belt states that helped Mr. Trump win the election in 2016. By promising to buy more American soybeans, corn and other agricultural products, China pledged to ease certain regulations to boost its imports of those goods, the people said.