In addition to erasing Chinese culture & to sacrificing big chunks of the population, he wiped out the sparrows of China. During the Four Pests Campaign of 1958–1962, the population was ordered to kill following pests: mosquitoes, rodents, flies and sparrows. 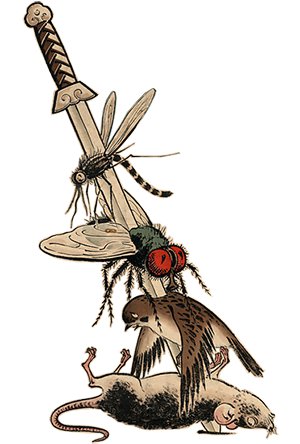 The first three of them are somewhat reasonable, as they are carriers for really nasty diseases – e.g., malaria and ‘the Black Death’. The sparrows were hated, because they picked the seeds after the peasants had sown the fields. The people actually hunted the birds by all means. Peasants made a constant noise around trees, to prevent the small birds from landing. The exhausted sparrows just fell down to the ground after a while, as they couldn’t find safe places to rest. It is estimated that 2 Billion of them were killed in a short time. With the sudden extermination of the species, a never-seen problem arose.

Indeed, the sparrows were eating a part of the seeds. But, what they actually ate the most were insects – e.g., grasshoppers. After the peasants rid the sparrow overnight – a natural predator –, the number of grasshoppers exploded. Billions of them swarmed over the fields & destroyed whole harvests with their immense appetite. A biblical punishment for dumb decisions.

The crops were bitterly needed during the Great Leap Forward. People were already starving, due to man-made famines. An estimated 20–40 million persons died. The Grasshoppers made things even worse. It took years to control this special (gu)pest.

As you have seen, the disappearance of a single species causes years of famine. I am about to tell you something which you probably don’t know.

The reason I say this is because I, myself, and most people I know didn’t know this basic fact, despite reading a lot about politics and economics.

The man below is called Michael Pettis 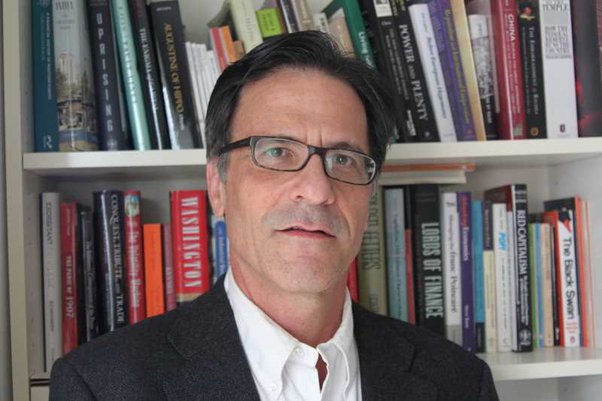 He is a professor of finance, working at Guanghua School of Management at Peking University (Beijing).

He alleges that China’s growth is less than half of what is reported:

So far, so “mainstream”. Many others have made this point. What is fascinating about his analysis is that he isn’t alleging that China is “faking” the numbers.

He is merely stating something he says is a fact – the way China calculates GDP is different from the rest of the world.

You could argue, perhaps legitimately, that every country has a right to calculate GDP in the way it sees fit.

That may be true, but we also, therefore, have to see how these different definitions might affect the overall picture.

As the old saying goes, “lies, damn lies and statistics”!.

Local governments in China operate under soft budget constraints, in contrast to the hard budget constraints of other major Western economies, and because they comprise a significant share of economic activity, China’s GDP numbers are fundamentally different in nature and as such, incomparable.

In the first China, a construction firm spends $100 digging a hole, then $100 filling it up. “In a hard budget constraint economy or in a normal accounting, you have an expense of $200 and nothing to show for it,” said Pettis.

In the second China, a construction firm similarly spends $100 digging a hole, then $100 filling it up. “But in [this] China, you don’t expense it,” he explained. “You call it an asset.

You say, I have now built an asset worth $200.” This, Pettis noted, is how GDP accounting works in the China that we all know. What this means is that China’s official GDP figures as currently reported are significantly inflated relative to actual economic conditions, and are also impossible to compare with the GDP figures of other nations.

You can see the full article here:

What China means when it says it wants “high quality” GDP growth
Beijing wants to focus on quality over quantity of GDP growth, but that’s much easier said than done.
https://qz.com/2119395/what-china-means-by-high-quality-economic-growth/

To give a simple example to his point, let’s say one province in China has a GDP of 600billion and the target is 6% growth (so 630 billion is needed).

Now let’s say there is so real growth of 3%. However, it is fairly easy, with the soft budget constraints for the local government to engage in unproductive (or low-yielding at least) investments to achieve the other 3%, which wouldn’t be counted in a hard constraint economy.

That is one reason there are so many ghost cities and excessive infrastructure projects in China, such as second and third airports in cities that don’t need them.

However, if you were to standardize the measurements, China and the US would have grown by a similar amount.

What is interesting is that he also appears regularly on the Chinese state, so his findings aren’t seen as embarrassing by the regime, and China itself is now focusing on “high-quality growth” because they recognize the problem.

I have yet to find somebody who has actually refuted his central claim that there is not necessarily any lying or manipulation going on, but the different use of statistics is distorting the total figures.

This should be interesting for investors thinking about investing in Mainland Chinese private companies.

I don’t think it makes any difference to those looking to invest in Chinese stocks because GDP growth and stock market performance often aren’t linked.

So, we can’t say that weaker GDP growth will mean lower valuations for Chinese stocks, especially as they look very cheap compared to some markets.

The Art Of War – Sun Tzu

The Governance Of China – Xi Jinping

In this episode of On The Margin Mike is joined by returning guests Grant Williams & Luke Gromen. We welcome back two financial market veterans for a special episode exploring the fracturing geopolitical landscape between the east and the west. Grant and Luke share their insight surrounding China’s declaration of war on the U.S, how the current monetary system could collapse China’s economy, the consequences of globalization, what the end game is for the dollar & how to prepare for the changing world order as two global superpowers collide.

18:44 ・ The consequences of globalization

20:11 ・ A battle of ideologies between the east and the west

24:51 ・ The current structure of the monetary system

31:30 ・ Inflation is the only way out of a sovereign debt crisis

Goldsmith warned elites about the dangers of free trade.

08:37・The difference in financial markets between China & the U.S

18:42・The consequences of globalization

20:08・A battle of ideologies between the east and the west

24:48・The current structure of the monetary system

31:26・Inflation is the only way out of a sovereign debt crisis

49:32・What assets to buy during financial repression

Why do Chinese Martial Arts keep loosing on challenge fights. Well this week we discuss the main problem. The difference in culture of training between the East and the West. It’s simply down to the difference in the approach of training martial arts.

Of course this leads to other questions: How do you know that Chinese Martial Art will WORK in a Real Fight? How do you tell it works for REAL? Is the Martial Art that you train fit for self defence or is it FAKE? We have made a few videos on these questions.

Most martial arts fail in street fights or self defence because people train for the wrong fight. This week we look at what self defence means and why martial arts may not always help you focus in the right way.

Chinese citizens are being told to treat the USA and the Outside world as the Enemy, they’re being prepared for war whilst we tiptoe around worrying about hurting the feelings of the Chinese government…. Time to wake up

For a deeper dive into China’s Propaganda influence and soft power, watch our liveshow ADVPodcasts: https://www.youtube.com/advpodcasts