Most GOP senators tried to deflect questions about the president’s latest controversial tweet.

If there was ever a tweet from President Donald Trump that Senate Republicans didn’t want to touch, it’s this one.

For four years, Senate Republicans have endured a regular gantlet of reporters’ questions about Trump tweets, ranging from attacks on their own colleagues to telling a handful of congresswomen of color to “go back” to the countries they came from.

Trump’s tweet Tuesday morning attacking a 75-year old protester in Buffalo — who was shoved by the police and bled from his head after falling — stunned some in a caucus that’s grown used to the president’s active Twitter feed. After examining a print-out of the tweet, Sen. Lisa Murkowski gasped: “oh lord, Ugh.”

“Why would you fan the flames?” she said of the president’s tweet. “That’s all I’m going to say.”

But though the moderate Murkowski was nearly rendered speechless, the missive mostly failed to get a rise out of Senate Republicans. Many know Trump will tweet something else soon they will be asked to respond to, even if the Buffalo tweet seemed a new frontier for Trump’s insult-laden social media persona.

“It’s a serious accusation, which should only be made with facts and evidence. And I haven’t seen any,” said Senate Majority Whip John Thune (R-S.D.) “Most of us up here would rather not be political commentators on the president’s tweets. That’s a daily exercise that is something you all have to cover… Saw the tweet. Saw the video. It’s a serious accusation.”

But those senators were the rare ones speaking out. Even Sen. Mitt Romney (R-Utah), who marched with Black Lives Matters protesters and voted to oust Trump from office in the impeachment trial, seemed exasperated.

“I saw the tweet,” Romney said. “It was a shocking thing to say and I won’t dignify it with any further comment.” 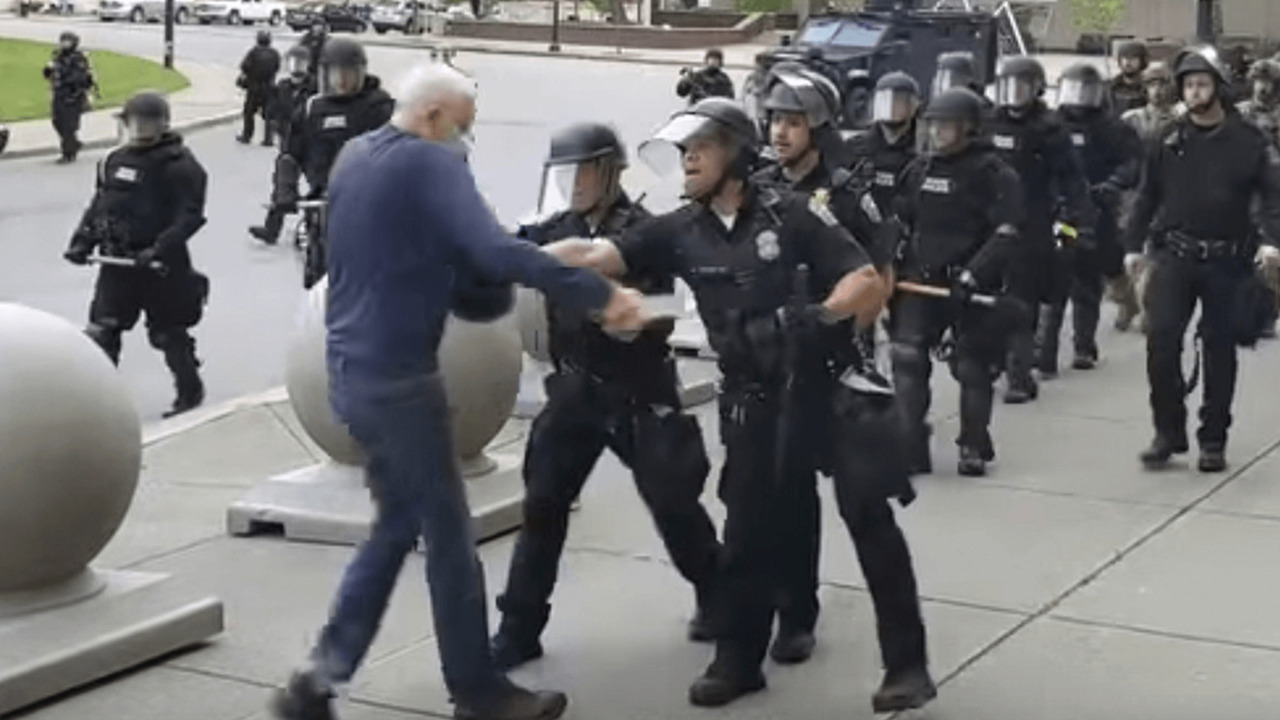 Many GOP senators declined Tuesday to respond to Trump’s tweet suggesting Martin Gugino, the Buffalo protester, “could be an ANTIFA provocateur.’ The president added, without evidence, that Gugino may have been trying to “set up” the police officers who hurt him. The tweet did not come up at the Republicans’ weekly lunch, according to an attendee.

Republican senators have a well-worn playbook by now if they don’t want to wade into the latest tweet-fueled controversy by saying they hadn’t seen Trump’s latest comments. Still, even when provided paper copies of the president’s tweet on Tuesday, many declined to view them.

Sens. Cory Gardner (R-Colo.) and John Cornyn (R-Texas) declined to comment on the tweet, saying they hadn’t read it. When asked whether they wanted to see the tweet, both showed little interest. Sen Marco Rubio (R-Fla.) said he had “no information about that man or who he is.”

Sen. Kevin Cramer (R-N.D.), who read a reporter’s printout of the tweet, said he knows “nothing of the episode,” which occurred last week and prompted widespread outrage. The Buffalo police department later suspended the two police officers involved without pay, and the Erie County District Attorney charged the officers with assault. Both pleaded not guilty and were released without bail.

“I don’t think Donald Trump is going to change his behavior,” Cramer said. “I’ll say this: I worry more about the country itself than I do about what President Trump tweets.”

Trump’s tweets questioning Gugino’s credibility come amid a nationwide reckoning about police brutality in the aftermath of George Floyd’s killing by Minneapolis police officer Derek Chauvin. Senate Republicans have urged the president to take on a more unifying tone but so far Trump has proven resistant.

Last week, peaceful protesters were cleared outside of the White House with tear gas so that the president could pose for a photo outside of a church, prompting a rare Republican rebuke.

The president’s latest attack on Gugino highlights the complicated prospects of Congress getting anything done when it comes to police reform. Democrats unveiled a sweeping police reform package Monday that would ban chokeholds and limit “qualified immunity” for police officers, among other provisions. Romney said Monday that he’s planning to introduce his own police reform bill and Sen. Tim Scott (R-S.C.) is also working on a proposal.

While Republicans have offered criticism of Trump’s handling of the protests, GOP senators see little upside in getting into a public argument with the president these days.

When asked about Trump’s tweet, Sen. Susan Collins (R-Maine.) merely replied: “I think it would best if the president did not comment on issues that are before the courts.”